"The ascendancy of evangelical Christianity, the demise of the practice of inter-marriage or cohabitation with Indian wives, and the onset of undisguised imperial arrogance (once the British had defeated all their military rivals on the subcontinent) all contributed to the painful termination of the easy relationship between Indian and Briton that had, by and large, prevailed during the 18th century."

"John Darwin has provided an ambitious, monumental and convincing reminder that empires are the rule, not the exception, in world history. What their passage has meant - and will continue to mean - for the people who live within them remains for others to explore."

"...Check this for yourself.  Almost no student, despite high marks in Indian history at school and university, will be able to tell you, even very approximately, how many Britishers were actually to be found in India in the colonial period.  He or she would have devoted a considerable amount of time to the study of British rule, would possess a store of other factual information, and may well be able to debate, quite intelligently, the character of colonial conquest.  But ask this particular question, and you are likely to draw a blank...
Officials numbered about 12,000 only.  These included all the British members of the Indian Civil Service, the Indian Police, the railways, and the irrigation and engineering services.  The most important group was thus numerically the smallest.  On the basis of these figures, there were more than two thousand Indians to each Britisher in India.

These figures are seldom, if ever, mentioned in nationalist historiography.  They are probably kept out of sight with good reason, for the numbers are embarrassingly small.  The remarkable thing about the British in India was that there were so few of them.  Even the Indian Civil Service, of which so much was heard, had only a thousand officers in all, half of whom were Indian.  An analysis based on such figures can make imperialism look more like a midget than a monster.  But in the nationalist view, the forces of justice and of good triumphed in India, despite the superior might of the foreign forces of evil.  An Indian David killed a British Goliath.  A fearsome adversary was overcome.  Conveying this impression requires exaggerating the might of the foreign forces of evil.  The story of 1947 has, in the last half century in India, moved towards precisely this exaggeration..."


As I have mentioned here earlier, I lived on  a tea estate in Assam from July 1989 continuously for about a year and then intermittently until 1992.

One of the weirdest things that was practised universally in the tea gardens of Assam was social segregation of three classes of employees- managers/ executives (few in numbers), babus/ clerks (quite a few) and labourers (large).

We were told not to socialise with the clerks, let alone labourers. That meant, we were neither supposed to invite them home nor go to their homes. Only 'executives' were given the membership to the plantation club.

Four-five labourers were assigned to our modest bungalow as helpers - mali, bearer, aaya, chowkidar. We did not know how to use bearer and aaya. So they liked to be posted to our place! As ordained, neither we  went to their homes nor got to know them properly.  It was as if they were Neanderthal while we were Homo sapiens! When we were away on vacation in Maharashtra, our chowkidar was murdered while returning home from the night duty.

I got along well with a couple of clerks- so well that we occasionally exchanged dirty jokes. One of them used to tell me a lot about sex lives of rather large looking ducks of Assam as well infidelities of some of tea estate men including current and past executives. In the streets of the town around our estates, one came across a few very fair skinned men with light (even blue) eyes. Apparently, they were offsprings of the past British sahibs!

I would have liked to invite those friendly clerks home for a meal. But I never did.

We were brown sahibs, continuing the practices started by the British sahibs. Why did the Brits follow such practices?

courtesy : Library of Congress and HisoryToday.com


John Darwin's two books 'After Tamerlane: The Global History of Empire', 2007 and 'The Empire Project/ The Rise and Fall of the British World-System, 1830–1970', 2009 are masterly studies of the empires and also provide antidote to the writings of the likes of Niall Ferguson.

"Darwin makes a good point in 'The Empire Project' that some people do suggest that the Empire is a story of scandal and exploitation that we should feel guilty about. Other historians of a more right-wing persuasion think the British Empire is a great story that we should be proud of. Darwin says it is not really very helpful to keep fighting about whether it was good or bad because there will never be agreement. Instead the way to move forward is to try to understand how it worked and why it fell apart. "

Mr. Darwin  has a new book out "Unfinished Empire: The Global Expansion of Britain".

Linda Colley writes in its review:

" Even when Britain's own troops were sparse – in India before 1770, or in the Caribbean because of disease levels – it often coped by hiring indigenous troops and slave soldiers to do the dirty work. The extreme smallness of British numbers in many overseas locations also tended to reinforce the use of racist distance as a tactic of rule. Keeping the "natives" (and women) out of certain clubs in imperial settlements was not just prejudice, but also an attempt to shore up the charisma of the local dominant white males."

When I read it,  I realised how this 'tactic' was deployed in the tea estates of Assam as late as in 1980's! Clerks= indigenous troops, slave soldiers= labourers...?

I have known what it was to be a Gora Sahib in India. And I did not enjoy it at all. 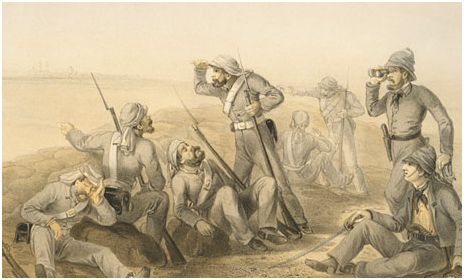 British troops man a remote outpost during the Indian uprising of 1857.

Photograph courtesy: Hulton Archive/Getty Images and Guardian,  December 28 2012
Posted by Aniruddha G. Kulkarni at 9:00 AM No comments: Links to this post