I have been watching Animal Armageddon on Animal Planet this month, October 2011.

First of all it is very humbling. You watch, 65 million years ago, a small mammal Purgatorius, our ancestor, hanging on to her dear life and you realise what all you need to worship in animal kingdom beyond elephants, snakes and cows.

Second I imagine if the likes of Dnyaneshwar (ज्ञानेश्वर), Tukaram (तुकाराम) and Shakespeare knew these extinct animal kingdoms and their annihilation, their imagery would have been even more colourful.

For instance, this is how Tukaram describes the importance of being small (and humble):

(Tuka says become smaller than small. In a deluge trees are washed out but grass survives.)

As I watched the documentary television miniseries, I realised that, with luck, I would dodge an animal armageddon in my lifetime.

But yesterday, on Laxmi Pujan day, as I heard and saw crackers being burst so savagely around me, I felt many birds and animals must feel that this indeed was the armageddon of their life.

Deep down, even I can't escape that feeling. 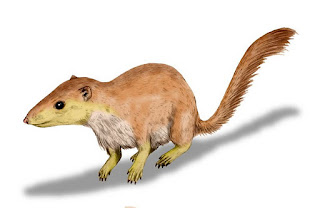 p.s. 'प्रलयकाळी' (cataclysm / universal devastation) is one of my favourite Marathi words. Why? Read this.
Posted by Aniruddha G. Kulkarni at 9:51 AM No comments: Links to this post