Punishments on the Most Exorbitant Scale

George Santayana:“The first things which a man learns to distinguish and repeat are things with a will of their own, things which resist his casual demands; and so the first sentiment with which he confronts reality is a certain animosity, which becomes cruelty toward the weak, and fear and fawning before the powerful. ... It is pathetic to observe how lowly are the motives that religion, even the highest, attributes to the deity, and from what a hard-pressed and bitter existence they have been drawn. To be given the best morsel, to be remembered, to be praised, to be obeyed blindly and punctiliously these have been thought points of honor with the gods, for which they would dispense favors and punishments on the most exorbitant scale.”

John Gray:"In reality, the threat of barbarism comes from within civilisation itself. This is not to endorse the Romantic myth of the noble savage. " Primitive" peoples are just as prone to cruelty and folly as the rest of humankind, and human history is not - as Rousseau taught - a long decline from original innocence. The distinction between civilisation and barbarism does not mark some societies off from others. It runs through all societies and through every human being. Violence and madness are never far beneath the surface, and when they break through it is often in savagery that is sanctioned by authority." 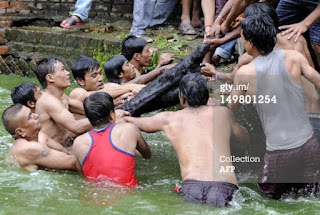 "Nepalese men hold on to a goat during an ancient annual Hindu festival ritual in Khokana village on the outskirts of Kathmandu, on August 4, 2012. In the ritual, a sacrificial female baby goat is thrown into a pond as local men in teams from localities compete to kill it, with the belief that whoever takes the prize will have a prosperous year ahead. Animal rights activists have been protesting against the cruelty of the festival despite the Nepalese government providing a small amount for the organisation of the festivities."

For more pictures in the series, visit http://www.gettyimages.in/detail/news-photo/nepalese-men-hold-on-to-a-goat-during-an-ancient-annual-news-photo/149801247