On December 2 2011, in Guardian, John Mullan has written about 10 of the most memorable hunting scenes in literature.

He asks: Can you suggest more?

I wish to suggest two.

1. A great epic 'Ramayana' is borne out of a hunting scene:

"Sage Valmiki goes to River Tamasa for a bath and sees a couple of birds, of which a hunter kills one. Valmiki unintentionally utters a poem, which is rich in grammar and new in metre, of which he is very much confused as to why such a poem has come from his tongue. Brahma, the presiding deity of letters appears and ordains Valmiki to author Ramayana, excellent epic of Rama, for which purpose alone he gave such divine meter and grammar to him."

("Oh! Ill-fated Hunter, by which reason you have killed one male bird of the couple, when it is in its lustful passion, thereby you will get an ever-lasting reputation for ages to come...")

This is the verse where this epic, Ramayana is said to have triggered off. 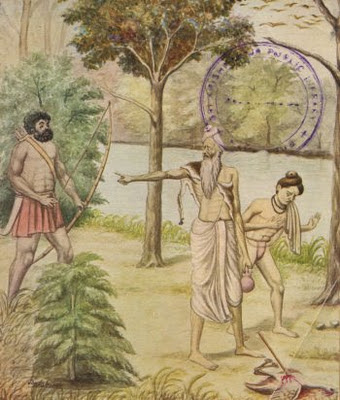 2. Passing away of Krishna in Mausala Parva of Mahabharata:

"After his brother had thus departed from the (human) world, Vasudeva of celestial vision, who was fully acquainted with the end of all things, wandered for some time in that lonely forest thoughtfully. Endued with great energy he then sat down on the bare earth. He had thought before this of everything that had been fore-shadowed by the words uttered by Gandhari in former days. He also recollected the words that Durvasas had spoken at the time his body was smeared by that Rishi with the remnant of the Payasa he had eaten (while a guest at Krishna’s house). The high-souled one, thinking of the destruction of the Vrishnis and the Andhakas, as also of the previous slaughter of the Kurus, concluded that the hour (for his own departure from the world) had come. He then restrained his senses (in Yoga). Conversant with the truth of every topic, Vasudeva, though he was the Supreme Deity, wished to die, for dispelling all doubts and establishing a certainty of results (in the matter of human existence), simply for upholding the three worlds and for making the words of Atri’s son true. Having restrained all his senses, speech, and mind, Krishna laid himself down in high Yoga.

"A fierce hunter of the name of Jara then came there, desirous of deer. The hunter, mistaking Keshava, who was stretched on the earth in high Yoga, for a deer, pierced him at the heel with a shaft and quickly came to that spot for capturing his prey. Coming up, Jara beheld a man dressed in yellow robes, rapt in Yoga and endued with many arms. Regarding himself an offender, and filled with fear, he touched the feet of Keshava. The high-souled one comforted him and then ascended upwards, filling the entire welkin with splendour..."

I still remember the picture that accompanied this story in Chandoba ('चांदोबा') dated early 1970's.

As a kid, as I read this story, I couldn't imagine how Krishna's foot was mistaken for a deer. I still can't!

Whatever else they may say, no one can claim that there is no Ram in this blog!
Posted by Aniruddha G. Kulkarni at 9:00 AM 2 comments: