"The truth is, women haven’t come nearly as far as we would have predicted 25 years ago. Somewhere along the line, especially in recent years, progress for women has stalled. And attitudes have taken a giant leap backward…

… The conversation online about women, as about so many other topics, degenerated from silly and snarky to just plain ugly — and it seeped into the mainstream.

Recently, before a TV appearance, I did an Internet search on one of the interviewers so I could learn more about her — and got a full page of results about her breasts. .."

It was OK.  I had not seen it for last couple of years.

I was quite surprised by 'bluntness' of Seth MacFarlane's song “WeSaw Your Boobs”. It was funny. But it seems to have enraged a few. 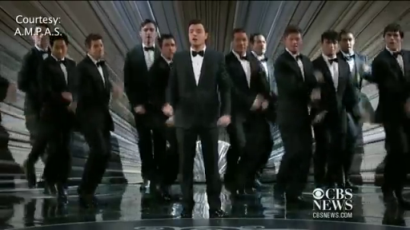 "...“We Saw Your Boobs” was as a song-and-dance routine in which MacFarlane and some grinning guys named actresses in the audience and the movies in which their breasts were visible. That’s about it. What made it worse was that most of the movies mentioned, if not all (“Gia”), were pretty great—“Silkwood,” “Brokeback Mountain,” “Monster’s Ball,” “Monster,” “The Accused,” “Iris”—and not exactly teen-exploitation pictures. The women were not showing their bodies to amuse Seth MacFarlane but, rather, to do their job..."

I completely agree with Ms. Davidson but Seth is still right and funny: We did see (some of) those- and not all of them pretty-  boobs anyway!

A few months ago, I  saw 'The Reader' (2008) starring Kate Winslet, who incidentally features longest in Mr. MacFarlane's song.

The movie is ordinary, forgettable and stands out largely for Ms. Winslet's nudity and her sexually explicit scenes with a  mid-teenager.  So how can one say that movie is strictly NOT  a "teen-exploitation"...It reminded me of "Mera Naam Joker", 1970 and 'Summer of '42", 1971...both films, by the way, much better than 'The Reader'.

I wonder why KW was given the Academy Award for Best Actress for that film.

“No one blinked at the Marc Jacobs fashion show last week when the model Freja Beha Erichsen appeared in a sheer black top that revealed that she was wearing a nipple ring. No one blushed at the Chris Benz show when Sasha Luss and Ekat Kiseleva posed in see-through camisoles. No one seemed particularly hot or bothered that Ali Stephens’s breasts were clearly visible through her dress when she walked for Derek Lam. No one was outraged that Francisco Costa showed a transparent raincoat at Calvin Klein with nothing but a thong underneath.

Peek-a-boo was the biggest trend at the New York Fashion Week that ended on Friday,

…But nudity, like fashion, has lost much of its power to shock.

We have become so desensitized to images of naked celebrities, sex tapes and Internet pornography that designers are hard-pressed to create anything that seems really transgressive.”

Yes, nudity might have lost its power to shock but who knows how it works on Oscar juries! 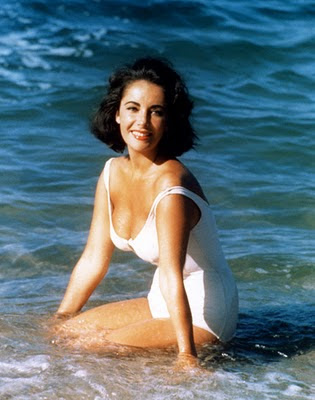 An iconic shot of the late Ms. Elizabeth Taylor splashing in the ocean, from the set of 'Suddenly, Last Summer' (1959). (Ms. Taylor received nomination  for the Academy Award for Best Actress for this role.)