Civilization is revving itself into a pathologically short attention span. The trend might be coming from the acceleration of technology, the short-horizon perspective of market-driven economics, the next-election perspective of democracies, or the distractions of personal multi-tasking. All are on the increase. Some sort of balancing corrective to the short-sightedness is needed-some mechanism or myth which encourages the long view and the taking of long-term responsibility, where 'long-term' is measured at least in centuries. Long Now proposes both a mechanism and a myth.

It began with an observation and idea by computer scientist Daniel Hillis.
"When I was a child, people used to talk about what would happen by the year 2000. For the next thirty years they kept talking about what would happen by the year 2000, and now no one mentions a future date at all. The future has been shrinking by one year per year for my entire life. I think it is time for us to start a long-term project that gets people thinking past the mental barrier of an ever-shortening future. I would like to propose a large (think Stonehenge) mechanical clock, powered by seasonal temperature changes. It ticks once a year, bongs once a century, and the cuckoo comes out every millennium."

Socrates, Confucius, the Buddha, and Zoroaster were all present in 5th century BC. No single person probably met all of them-except in Gore Vidal’s “Creation”- but they sure inhaled the same air together.

Shakespeare, Cervantes and Tukaram created the greatest literature of their respective languages-English, Spanish, and Marathi- in 17th century.

We need patience to wait for the cuckoo to arrive. We use word “great” so easily because we have lost the sense of long. Let us face it. In our short life we may never come across new greatness in most fields of our civilization. And even if we think we have it amongst us, time may prove us silly.

The Clock of the Long Now promises to teach us to wait for the cuckoo.. 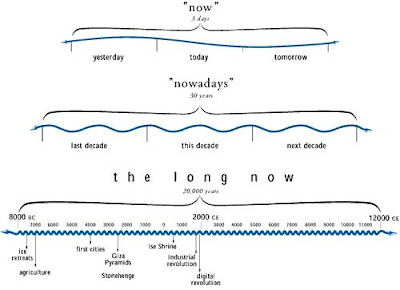 Artist: Mike Luckovich
Posted by Aniruddha G. Kulkarni at 2:50 PM No comments: Links to this post