In Maharashtra,India, when people are describing someone male, borne in early to mid 20th century, one attribute is often used to describe their nature- volatile- given to extreme anger. My father’s father belonged to that category and my father followed the suit. My son may write what I do.

According to my father, he loved his father deeply. My father, when he was twenty-one, married my mother much against his father’s wishes. He and his father remained estranged until I was 27. For almost 30 years, they did not meet each other, including when my father’s mother died.

My wedding gave some kind of an opportunity to both of them to patch up. They seemed to succeed at that. I was present at their reunion. It was both moving and funny. Moving for obvious reasons. Funny because I don't know what happens when you lead your separate lives for 30 years!

Then, I had heard my grand father was making plans to visit and stay with my parents for few days. But suddenly he died leaving behind a will.

The document disinherited four of his sons bequeathing all his property (including some prime property in Pune) to his youngest son. My father did not want a dime from his father but what really broke his heart was the will document spoke scathingly of him. My father thought my grandpa might not give him anything material but would recognise his qualities as a good son. He did neither. He perhaps never forgave my father.

All because, remember, my grandpa’s nature was volatile!

Did my grandpa look like Peter Arno's character below when he wrote his will?

BTW- Another volatile old man I knew, my friend's grandpa- Bedekar, looked like the old man in the picture. I don't know about his will but I remember his anger. When my friend and I were playing a game of chess, he came over and started moving pieces on his grandson's behalf. Unfortunately he lost. His whole body was shaking. I was scared. 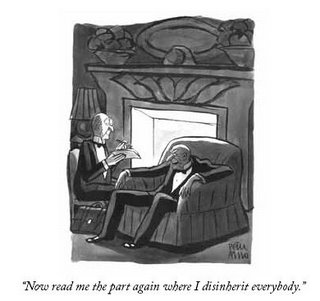