Nil-nil is the Score of Life but thankfully not at Euro 2008!

From 1972 Munich Olympics onwards, milestones of my life’s journey are Olympics, world-cup football and euro. Throw in some closely fought cricket, field hockey & kabaddi and map of life is complete.

All personal events of my life are sort of in between.

I still remember electricity of Marco van Basten of Euro 1988 and here he is looking as dapper as 20 years ago, in the dugout as a coach, ready to come out any minute to score a goal himself.

When my sister gave birth to a baby boy in 1991, I suggested a name- Donadoni. It was turned down. Ishan is now 16 and Roberto Donadoni is present here as Italy’s coach.

Has life stood still in some ways?

“…The quality of play is extolled by everyone, defensive tactics are nowhere to be seen, team play is not stifling the talent of individuals, who are frequently giving some particularly dazzling performances…”

This football on display reminds me of the football we played at our school in Miraj. One ball, 40 odd boys, running from one end of the ground to the other until the bell rang.

I like Adam Gopnik’s analysis- "Nil-nil is the score of life.” but happy that Euro 2008 is not following it!

The European Union makes one excuse after another to keep out knocking Turkey- waiting and frustrated- from joining them but here they can’t do so. Turkey has just knocked the door down to enter the quarterfinals.

I am tired of verbose limited-overs cricket where some times analysis runs longer than the playing time especially when it comes to umpiring decisions.

Read Platini on the subject- “…The referees are controlling these fast and energetic matches well and one or two minor errors of judgement, usually down to just a few centimetres and, moreover, spontaneously acknowledged, have not spoilt this great festival of football…To err is human and that is how it should stay as far as football is concerned.” 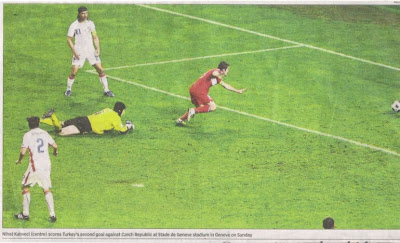 Loneliness of Petr Czech
Picture Courtesy: Times of India and Reuters
Posted by Aniruddha G. Kulkarni at 10:40 AM No comments: Links to this post