China a Ferocious Dragon, US a Bank-clerk like Uncle Sam?

But I was irritated by the cartoon used for it.

Why is China represented by a ferocious looking dragon while US is by an old-bank-clerk like Uncle Sam?

Why is China, in the Anglo-Saxon media, always represented by a ferocious looking dragon?

Doesn't such a picture prejudice a reader of our ever-shrinking-attention-span era profoundly even before he reads the first word of the essay?

And is Uncle Sam so docile?

Beverly Gage writes in NYT June 12, 2009: "...Beginning in the 1870s, Jackson Lears argues, Americans attempted to stitch their country back together around a “militarist fantasy” of Anglo-Saxon supremacy. Yet rather than bringing the hoped-for personal and national redemption, their efforts produced tragedy. According to Lears, the same cultural logic that justified lynching in the American South and the conquest of American Indians in the West eventually led to war in Cuba, the Philippines and Europe — and, a century later, to our own mess in Iraq..."

Imagine if the cartoonist used an image of laughing Buddha or a tickling Confucius to represent China.

I understand China very little. (Read more on that here.) But I wonder if we can ever trust the Western media to tell us about her.

Or for that matter about India.

I recently acquired best selling book "In Spite of the Gods", 2006 written by Edward Luce, an FT staffer posted in India from 2001-05.

I wish to read it. But I was put off by the first few lines of 'Introduction' itself. He quotes Rabindranath Tagore and introduces him as "perhaps India's greatest poet".

Rabindranath himself would have admitted that, as a poet, he was not even close to the most of these giants.

Mr. Luce's line should be redrafted as 'perhaps India's most known poet in the West and one of the best in 20th century'. 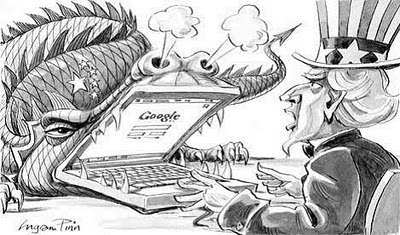 Artist: Ingram Pinn, courtesy: FT
Posted by Aniruddha G. Kulkarni at 9:00 AM No comments: Links to this post