ARUNDHATI ROY has written a devastating (does she know any other way?!) essay “Scandal In The Palace” (Outlook October 1, 2007).

Ms. Roy says: “…When there's a scandal about a former chief justice and his tenure in office, it's a little difficult to surgically excise the man and spare the institution. But then commenting adversely on the institution can lead you straight to a prison cell as some of us have learned to our cost…

The higher judiciary, the Supreme Court in particular, doesn't just uphold the law, it micromanages our lives. Its judgements range through matters great and small. It decides what's good for the environment and what isn't, whether dams should be built, rivers linked, mountains moved, forests felled. It decides what our cities should look like and who has the right to live in them. It decides whether slums should be cleared, streets widened, shops sealed, whether strikes should be allowed, industries should be shut down, relocated or privatised. It decides what goes into school textbooks, what sort of fuel should be used in public transport and schedules of fines for traffic offences. It decides what colour the lights on judges' cars should be (red) and whether they should blink or not (they should). It has become the premier arbiter of public policy in this country that likes to market itself as the World's Largest Democracy…

Ironically, judicial activism first rode in on a tide of popular discontent with politicians and their venal ways. Around 1980, the courts opened their doors to ordinary citizens and people's movements seeking justice for underprivileged and marginalised people. This was the beginning of the era of Public Interest Litigation, a brief window of hope and real expectation. While Public Interest Litigation gave people access to courts, it also did the opposite. It gave courts access to people and to issues that had been outside the judiciary's sphere of influence so far. So it could be argued that it was Public Interest Litigation that made the courts as powerful as they are. Over the last 15 years or so, through a series of significant judgements, the judiciary has dramatically enhanced the scope of its own authority….

The expansion of judicial powers has not been accompanied by an increase in its accountability. Far from it. The judiciary has managed to foil every attempt to put in place any system of checks and balances that other institutions in democracies are usually bound by. It has opposed the suggestion by the Committee for Judicial Accountability that an independent disciplinary body be created to look into matters of judicial misconduct. It has decreed that an fir cannot be registered against a sitting judge without the consent of the chief justice (which has never ever been given). It has so far successfully insulated itself against the Right to Information Act. The most effective weapon in its arsenal is, of course, the Contempt of Court Act which makes it a criminal offence to do or say anything that "scandalises" or "lowers the authority" of the court. Though the act is framed in arcane language more suited to medieval ideas of feminine modesty, it actually arms the judiciary with formidable, arbitrary powers to silence its critics and to imprison anyone who asks uncomfortable questions….

Until recently, under the Law of Contempt, even truth was not considered a valid defence. So suppose, for instance, we had prima facie evidence that a judge has assaulted or raped someone, or accepted a bribe in return for a favourable judgement, it would be a criminal offence to make the evidence public because that would "scandalise or tend to scandalise" or "lower or tend to lower" the authority of the court.

Yes, things have changed, but only a little. Last year, Parliament amended the Contempt of Court Act so that truth becomes a valid defence in a contempt of court charge. But in most cases (such as in the case of the Sabharwal...er... shall we say "affair") in order to prove something it would have to be investigated. But obviously when you ask for an investigation you have to state your case, and when you state your case you will be imputing dishonourable motives to a judge for which you can be convicted for contempt. So: Nothing can be proved unless it is investigated and nothing can be investigated unless it has been proved…

It all becomes a bit puzzling when ex-chief justices like Justice S.P. Bharucha go about making public statements about widespread corruption in the judiciary. Perhaps we should wear ear plugs on these occasions or chant a mantra.

It may hurt our pride and curb our free spirits to admit it, but the fact is that we live in a sort of judicial dictatorship. And now there's a scandal in the Palace…

In most other countries, the definition of Criminal Contempt of Court is limited to anything that threatens to be a clear and present danger to the administration of justice. This business of "scandalising" and "lowering the authority" of the court is an absurd, dangerous form of censorship and an insult to our collective intelligence. ..”

Reading this makes me numb. All I think of, during this Ganpati festival, is a prayer for the Supreme Court. "God, give them wisdom". 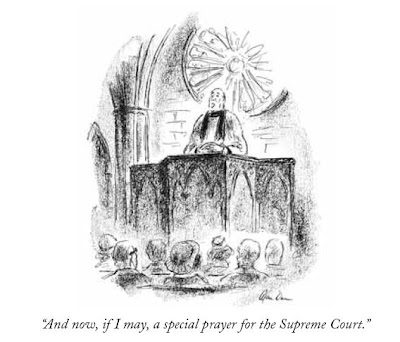