"So we just sat there, and she started crying softly like the rain on the window. And we didn't say anything. Maybe she had stopped thinking about it, but I hadn't. I couldn't because it was all tied up with something I'd been thinking about for years. Since long before I ever ran into Phyllis Dietrichson. Because, you know how it is Keyes, in this business you can't sleep for trying to figure out all the tricks they could pull on you. You're like the guy behind the roulette wheel, watching the customers to make sure they don't crook the house. And then one night, you get to thinking how you could crook the house yourself. And do it smart. Because you've got that wheel right under your hands. You know every notch in it by heart. And you figure all you need is a plant out front, a shill to put down the bet. And suddenly the doorbell rings and the whole setup is right there in the room with ya. [pause] Look, Keyes, I'm not trying to whitewash myself. I fought it, only I guess I didn't fight it hard enough. The stakes were $50,000 dollars, but they were the life of a man too, a man who'd never done me any dirt except he was married to a woman he didn't care anything about. And I did."
(screenplay of one of the greatest noir films of all time,  'Double Indemnity', 1944)


“....They watched me go out and didn’t say goodnight. I walked down the long corridor to the Hill Street entrance and got into my car and drove home.


No feelings at all was exactly right. I was as hollow and empty as the spaces between the stars. When I got home I mixed a stiff one and stood by the open window in the living room and sipped it and listened to the groundswell of the traffic on Laurel Canyon Boulevard and looked at the glare of the big angry city hanging over the shoulder of the hills through which the boulevard had been cut. Far off the banshee wail of police or fire sirens rose and fell, never for very long completely silent. Twenty-four hours a day somebody is running, somebody else is trying to catch him. Out there in the night of a thousand crimes people were dying, being maimed, cut by flying glass, crushed against steering wheels or under heavy tires. People were being beaten, robbed, strangled, raped, and murdered. People were hungry, sick; bored, desperate with loneliness or remorse or fear, angry, cruel, feverish, shaken by sobs. A city no worse than others, a city rich and vigorous and full of pride, a city lost and beaten and full of emptiness.


It all depends on where you sit and what your own private score is. I didn’t have one. I didn’t care. 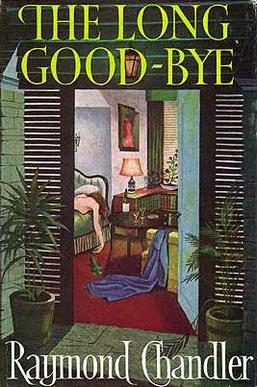