“...When painting a still life, Paul Cézanne used to switch between vantage points, sometimes overnight, sometimes during a single painting session. He was seeking momentary sensations, fleeting perceptions to combine in a single composition. When you see his version of a bowl of apples, for instance, the visible curves of the rim of the bowl look as if they can never meet. Cézanne painted strangely distended melons, because he wanted to capture the way the fruit seems to change shape from different angles. In his assemblages of odds and ends, the distortions of vision, as each object assumes its own perspective, are sometimes baffling, sometimes maddening, always intriguing. He painted the same subjects over and over again, because with every fresh look you see something new, and every retrospect leaves you dissatisfied with the obvious imperfections of partial vision.
The past is like a painting by Cézanne—or like a sculpture in the round, the reality of which no single viewpoint can disclose. I do not say so to occlude reality or subvert truth. On the contrary, I think objective reality (by which I mean, at least, what looks the same by agreement among all honest observers) lies somewhere out there, remote and hard of access—at the summation, perhaps of all possible subjective perspectives. Whenever we shift position, we get another glimpse; then, like Cézanne, we return to our canvas and try to fit it in with all the rest...”

(‘THE LIMITS OF EVOLUTION: Why evolutionary theory fails to match historical reality’ from ‘A FOOT IN THE RIVER: Why Our Lives Change—and the Limits of Evolution’, 2015) 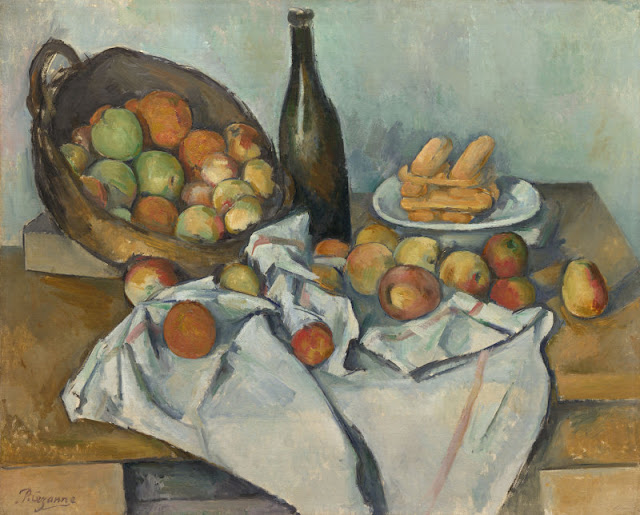 
“...The piece is often noted for its disjointed perspective. It has been described as a balanced composition due to its unbalanced parts; the tilted bottle, the incline of the basket, and the foreshortened lines of the cookies mesh with the lines of the tablecloth. Additionally, the right side of the tabletop is not in the same plane as the left side, as if the image simultaneously reflects two viewpoints...”