“...But there is a final lesson from ancient Egyptian history that those urging regime change should heed. Today, tanks stand guard beside the Pyramids of Giza, the grandest symbols of authoritarian rule ever built. The pyramids sum up the unbridled confidence of ancient Egypt at the height of its power. The pyramid-builders must have assumed that the glories of pharaonic civilization would last forever. What brought the Age of the Pyramid to an end in 2175 B.C. was not war, invasion, or pestilence, but a political vacuum following the demise of a long-lived ruler...”

So what happened to the ruler after death? 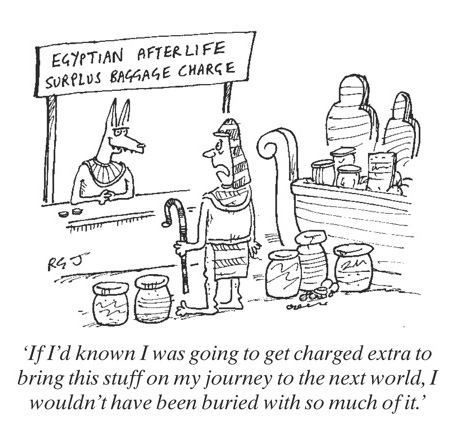 
Some of the funniest cartoons I have seen, over the past ten years or so, are from the screens of The Spectator, UK. Its cartoonists are spartan, make do with whatever space they are allotted and are NOT always politically correct.

Btw- look at the character manning excess baggage counter....Anubis, a god associated with mummification!
Posted by Aniruddha G. Kulkarni at 9:00 AM