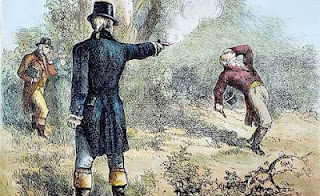 I immediately remembered Gore Vidal not just for his novel "Burr: A Novel" but his combative nature.

I love almost all the non-fiction Mr. Vidal has written. (I have still not read any of his fiction.)

How lyrical he could get...sample this:

“This is, suddenly, in the midst of the turbulent Greco-Roman world, the calm voice of Krishna. All is illusion for the enlightened. Plainly, Cavafy, himself no Arjuna, did achieve something very like that ultimate state of enlightenment where, not fooled by words, he was able to so order them as to make our common voyage, viewed from his unique angle, seem beautiful, even consoling, in its shining nothingness.”

(from foreword to “Before Time Could Change Them: The Complete Poems of Constantine P. Cavafy,”)

He could be so scathing...

“I've said that the fact that people seldom read anymore, particularly in the great Republic to the east of us. Readers are few. All these literary prizes should go to the readers: "Nobel Prize for the best reader in Milwaukee." And you know, we must honor them because they are so few. Since literature means nothing to the general public and they don't know the names, really, of any of the writers, nor would they dream of reading them... I've never been a journalist which means that I don't use opinions as facts. And this is unknown to journalists everywhere at any time; I don't do that at all.”

“Well, I say that eternity is a very long time, if it could be called time, and that the human race is just a passing fancy. We were preceded by viruses, it looks like the viruses will probably kill us all. Bacteria of some kind -- they have long, long lives, along with cockroaches, and ... I was never one to take the idea of the human race at all seriously. To me we're just another form of rather chattering monkeys. I don't believe in afterlife, but that's why I believe all the more deeply in this life, being the one thing that we can fix. And why I am in a state of continuous high blood pressure, outrage, at how badly we screw everything up in the United States, which is basically the most blessed of countries -- Native Americans to one side, -- but it was a fairly empty place for a lot of Europeans and Asians to come to -- How we could have come to this, all because of the theater of something called the Cold War and the profits they have made, the Defense industry, is a tragedy that I have lived through in my life. I have seen -- I saw the High Noon. I got out of the Army in 1946, I was in the Pacific, I remember '45 as the moment when we were the great and first global empire, and we were absolutely unbeatable: the greatest economy, and here we sit 50 years later, and look at us. All I hope is that something will happen that will change it for the better, and that is somebody who is maybe listening to us now.”

“Put bluntly, who collects what money from whom in order to spend on what is all there is to politics, and in a serious country should be central preoccupation of the media.”

“The Kennedys were an eighteenth-century amoral couple, together for convenience…..Even now the photogenic charm of the couple at the center of so much corruption and incompetence still casts its spell.”

I don't know if it is the beginning or the end of his famous rivalries. (Norman Mailer allegedly head-butted Vidal in December 1971.)

While I love Mr. Vidal's lyricism I also have a soft-corner for head-butting since 2006 football world cup final. 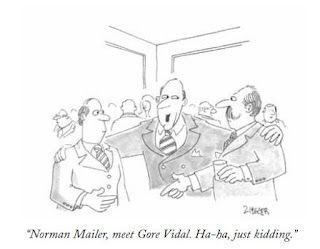