Lions and Horses at Fence 11, Nelson's Column at London 2012

… should the truth about the world exist, it’s bound to be nonhuman.

Joseph Conrad:...even if a man has taken to flying- a great uplift, no doubt, but no great change. He doesn’t fly like an eagle; he flies like a beetle. And you must have noticed how ugly, ridiculos, and fatuous is the flight of a beetel.

At London 2012 each of the 12 obstacles used for the equestrain events pays homage to an important landmark or historical note.

At one of them, fence 11, Nelson's Column, pictured below, four bronze lions flank the base of the monument.

I was little surprised by the choice of lions.

Wouldn't that scare off the horses?

Or will the lions get bored? And if they do, would they behave the way they do in the cartoon- one of the best I have seen- below? 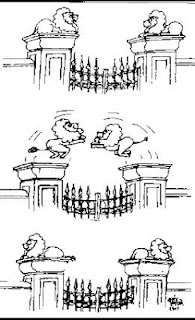 Sarwate has this to say about his cartoon:

"The picture of inanimate statues of lions on a gate springing to life and jumping at each other, presumably to relieve boredom, looking at each other and scenery around, nonstop for years and years, induces a spontaneous laughter in us. The unexpectedness of the happening tickles us at a first glance. After enjoying this momentary amusement, a second thought enters our mind and suggests a non humorous human dimension to the incident. Is it not the kind of response we human beings sometimes adopt, without much thought, and seek a change, just a change to overcome boredom and land in another situation even more boring? The lions have gone through similar experience and found to their regret that jumping has not improved the situation!"