My favourite actor Gene Hackman's character in "Mississippi Burning" is asked: "Do you like baseball, do you, Anderson?"

And he answers: "Yeah, I do. You know, it's the only time when a black man can wave a stick at a white man and not start a riot."

Thankfully a lot has changed since 1964. Not just in US but world over.

In London 2012, a lot of black men and women will climb the podium to start joyous riots.

Look at the following cover of the New Yorker from year 1936: 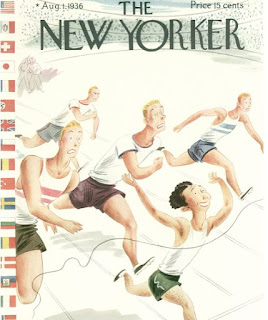 Although the picture is very good- a Jewish man beating hulking, blond-haired runners, presumably Aryans- I thought the artist missed a wonderful opportunity.

He could have shown a black winning the race because after all it indeed was a black- Jesse Owens- who won four gold medals there: one each in the 100 meters, the 200 meters, the long jump, and as part of the 4x100 meter relay team!

The New Yorker apparently didn't learn from this.

”(During the fourth decade of The New Yorker 1955-1964) the foremost domestic issue of the time was the struggle of the black minority for civil rights, yet people of color are almost totally absent from these cartoons.” 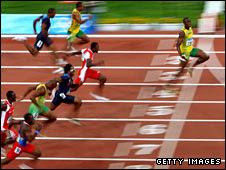 Following picture is probably one of the few exceptions to Mr. Updike's observation. (For another exception see a previous post here.)

I don't know what Mr. Addams meant but I see it as how the black Africans are looking down on a white, attempting to clear a tiny height in pole vault, with certain amusement. It's cruel because blacks are NOT there to participate in the event. Reminds me of Sherpas of climbing. 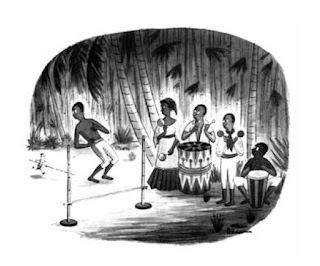 Morning of Aug 6 2012 became memorable to me for this: 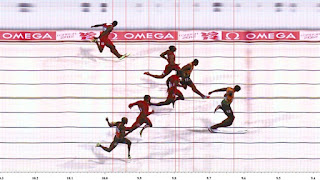 Picture courtesy: http://www.london2012.com
Posted by Aniruddha G. Kulkarni at 11:40 AM