(Today is my mother's 73rd birth anniversary. Thank you, Aai for those wonderful story telling sessions at dinner times. Mahabharata never became boring because of you more than Vyasa!)

I was always fascinated by reading of conch shells that were blown in the battles described in Mahabharata. They seemed to be an important weapon like a mount or a bow.

Thankfully, in real life, I heard them only in temples and a couple of homes.

Are they mentioned in the ancient literature describing battles from outside India?

Each conch had a distinct sound. Like Louis Armstrong's horn sounds different from that of Miles Davis.

The son of Kunti, King Yudhishthira,
Blew (his conch) Anantavijaya,
While Nakula and Sahadeva
Blew Sughosha and Manipushpaka conches, respectively..." 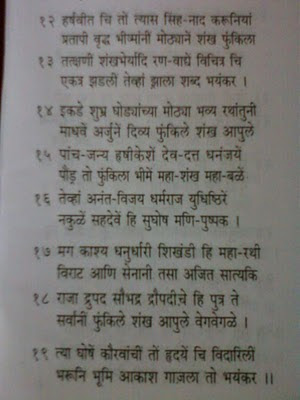 (double click on the picture to get a larger view)

Interestingly, I have never come across conches in battlefields of Ramayana. I wonder why.

Alas, there are no pictures of conch shells from those days.

CORNELIA DEAN has written a wonderful essay on seashells for The New York Times July 12 2010. 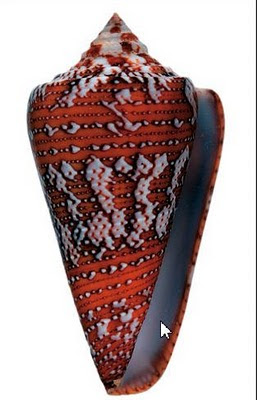 courtesy: “The Book of Shells” by M. G. Harasewych and Fabio Moretzsohn

Matchless Cone (Conus cedonulli) was one of the rarest shells in the 18th century. In 1796 a specimen brought more than six times as much as a painting by Vermeer that was sold at the same auction. It is still considered rare to uncommon, and it is prized by collectors for its beautiful pattern. With the advent of scuba diving, it is now found more often. All cone shells are venomous and should be handled with care when alive. The venom of C. cedonulli is not fatal to humans, but its sting may still be painful.
Posted by Aniruddha G. Kulkarni at 9:00 AM

Its surprising that today i was reading about conches and now i came across this post. Now to ponder over the point - was Sri Krishna's conch a matchless cone: In those days, every important warrior had conches which belonged to a class called Dakshinavarti. Panchajanya is specifically the rarest of rare in Dakshinavarti class. The characteristic of these shankhas is that they open on the left. Today, they can be procured at a very high price.

Thanks Samurai for your kind words.

But more than that I like the info you have given on the conch shells. I really appreciate it.

I wish more people like you visited this blog.