Kavita Raut, You inspire me

Kenenisa Bekele:
Ethiopians are born on high altitude and brought up under conditions which are low in oxygen. They prefer running for most of their daily activities, a habit they have nurtured for centuries. This has done them a world of good. In fact, many athletes had been running many miles to school everyday, before their talent was recognized.

Kavita Raut's hamlet near Nashik is low on many things including water but oxygen is not one of them. As a child, apparently, she ran a couple of kilometres every day just to fetch water.

My wife and I watched the race live. We were happy to see two diminutive Indian girls leading it.

I thought it was too good to be true. Even English commentators kept mentioning them as "Indian girls".

Kavita Raut fell behind at some point. We forgot about her and kept cheering Preeja Sreedharan who led the race for a while.

As Ms. Raut ran last paces of the race she looked pale and white. I was worried for her. (I am not sure but I thought she puked after the race.) It all looked surreal.

After the race, as Kavita joined two Kenyans in running the lap of honour, I don't think they paid much attention to her.

Maybe in near future, they will do so, when Kavita overtakes them in a live race.

Since Friday evening reams have been written about her and her background. A xenophobic member of Marathi TV media tried to gloat about her being "Marathi". Contrast this with the big heart shown by Delhi spectators when they cheered second loudest for Pakistani contingent at the CWG opening ceremony.

Sunil Gavaskar reportedly told a TV channel after V V S Laxman's recent match winning effort at Mohali that it was perhaps the greatest performance of an Indian in any sport. I hope Mr. Gavaskar watched Ms. Raut.

Earlier on this blog I hoped "some one like Moses Kipsiro was my direct ancestor". Male ancestor.

Here I know that my mother in many aspects was like Kavita and so are millions of other Indian women. Most sadly don't finish on any podium. For me, however, they are all winners. 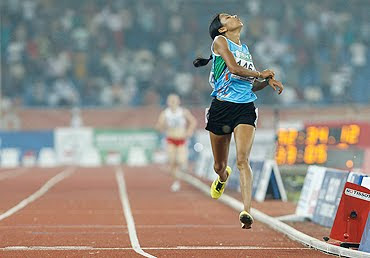 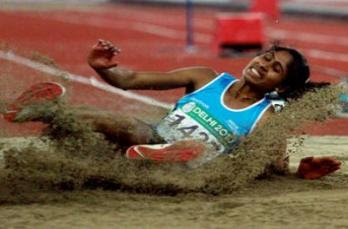 Prajusha Malaikkal, Jumping for Joy and Silver
Posted by Aniruddha G. Kulkarni at 9:00 AM

Nice analysis and well deserved kudos to the Indian Girls ! Wish, the CWG organizers can provide timely transport to games venues so that they do not have to ride in auto rickshaws... While the players bring respect and fame, the organizers need to shape up....