Piano as an Aquarium Bar

The Times of India (April 10, 2009) has reported passing away of Shakti Samanta without mentioning "An Evening in Paris"(1967).

The music of "An Evening in Paris" was composed by Shankar Jaikishan.

I just love piano: its look- majestic like an elephant- and its sound.

Piano was embraced by Indian film industry in 1930’s. Keshavrao Bhole केशवराव भोळे at Prabhat प्रभात was the first to use instruments such as the piano, the Hawaiian guitar and the violin in his compositions.

I have seen a lot of pianos in Hindi films but little of them in real life.

There are so many hummable Hindi film songs where a hero or a heroine is banging away at the piano (to be precise: pretending to do so as almost none of them knew/knows how to play it), onlookers are standing or moving around with a glass in their hands, the story is galloping forward.

Piano has always seemed a lot of real estate for me because I have lived largely in small houses. Therefore, I have always wondered: What else can it be put to use?

Here is an idea: aquarium-cum-bar. 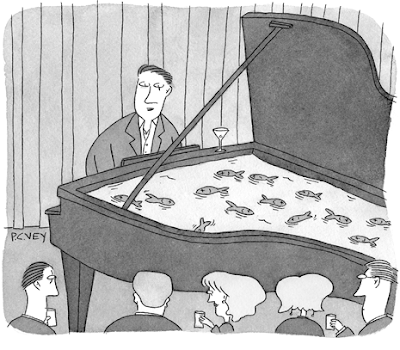 You Can Tune a Piano but You Can't Tuna Fish...I guess.