“The Leader of Opposition, Shri L.K. Advani has chosen to use all manner of abusive objectives to describe my performance. He has described me as the weakest Prime Minister, a nikamma PM, and of having devalued the office of PM…” (The Times of India)

"USA's President Barack Obama: He (Manmohan Singh) has been doing a wonderful job in guiding India even prior to being the Prime Minister along the path of extraordinary economic growth. That is a marvel, I think, for all of the world," the US President remarked, apparently referring to Singh's pioneering role in India's economic liberalisation..." (April 4, 2009)

“Paul Krugman has emerged as Obama's toughest liberal critic. He's deeply skeptical of the bank bailout and pessimistic about the economy…

…, he has been critical, if not hostile, to the Obama White House.
In his twice-a-week column and his blog, Conscience of a Liberal, he criticizes the Obamaites for trying to prop up a financial system that he regards as essentially a dead man walking. In conversation, he portrays Treasury Secretary Tim Geithner and other top officials as, in effect, tools of Wall Street…

… says Krugman, "the White House has done very little by way of serious outreach. I've never met Obama. He pronounced my name wrong"—when, at a press conference, the president, with a slight note of irritation in his voice, invited Krugman (pronounced with an "oo," not an "uh" sound) to offer a better plan for fixing the banking system…” (Newsweek April 06, 2009) 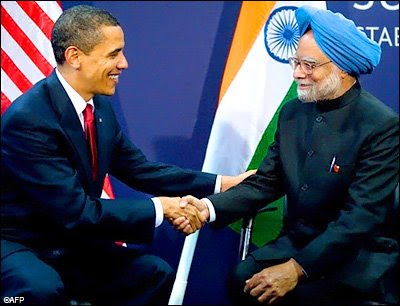 “Dr. Singh, before we talk about Pakistan, I want your advice as a well respected economist. Is Paul Kroogman a nikamma (useless) economist?”
Posted by Aniruddha G. Kulkarni at 9:00 AM