Mumtaz@70....Versatile Or Not, Still My Darling

Sony Max was running a contest to "Pick Your Favourite Versatile Actress" in March 2017.

I ignored the word versatile and voted for Mumtaz. For me, it was a no-brainer.

I have liked her in many films, even where she was supposedly playing second fiddle such as Brahmachari, 1968. There I wish she played the role of almost lifeless Rajshree!

She was really outstanding in films such as Pyar Kiye Ja, Ram Aur Shyam, Do Raaste, Sachaa Jhutha, Dushman, Tere Mere Sapne, Hare Rama Hare Krishna, Lofar, Chor Machaye Shor. Indeed in many of those films, she did better than her leading male costar.

Some her endearing qualities as a great entertainer are demonstrated in many Hindi films songs that are picturised on her, one of them being 'Kanchi Re Kanchi'.

Following is a moment where she is shooing away kids by gesticulating rather absentmindedly as her mind is really focused what Prashant Jaiswal (Dev Anand) is singing outside. For me,  it captures the best, albeit occasionally,  that Indian cinema offers me- dreaminess, melody, tenderness, beauty... 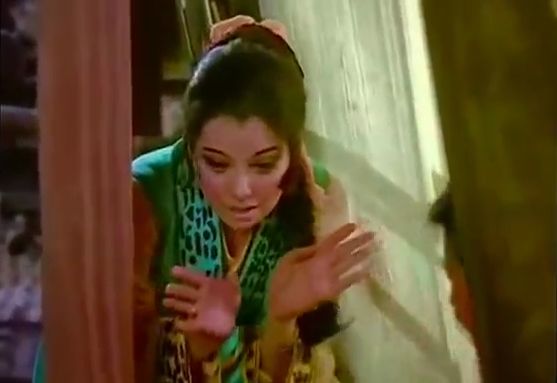 courtesy: current copyright-holders to the film
Posted by Aniruddha G. Kulkarni at 9:00 AM