When ‘Batman v. Superman: Dawn of Justice’ was released in March 2016, majority of reviews were lukewarm towards it. But they were almost unanimous in praise of ‘Wonder Woman’ performed by Gal Gadot in it. 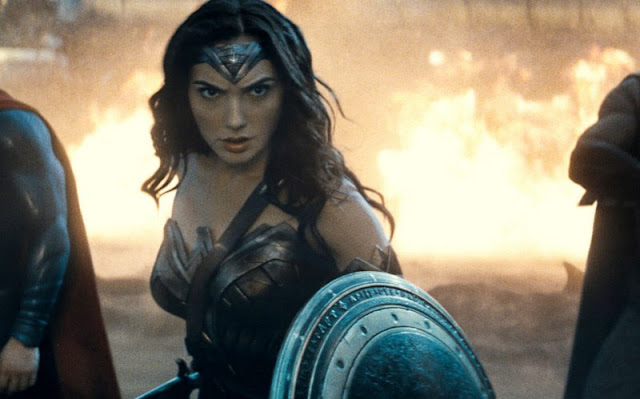 Some have argued that feminism is on decline worldwide. When in early 2016, Kim Kardashian and Emily Ratajkowski justified posting their nude selfies on internet as a form of feminism, one wonders if it is true.

But it was not always so.

Prof. Jill Lepore writes in her magisterial ‘The Secret History of Wonder Woman’, 2014:
“...Wonder Woman isn’t only an Amazonian princess with badass boots. She’s the missing link in a chain of events that begins with the woman suffrage campaigns of the 1910s and ends with the troubled place of feminism fully a century later. Feminism made Wonder Woman. ..”

Most Indians think of Karve as only a social reformer who worked on the issues like birth control, family planning and sex education but very few know that his first goal was that women achieved as much sexual freedom as men.  Birth control was only the by-product of it.
Karve also was a rationalist- in the mould of Gopal Ganesh Agarkar (1856-1895), an art critic, a thinker, a college teacher.

The late M V Dhond (म. वा. धोंड) has argued that because Karve never shied away from promoting sexual freedom of women, his work on birth control suffered. He was persecuted by the government of the day and some sections of the civil society.   He and his wife personally suffered a lot. Dhond felt Karve should have focused only on birth control. India was ready for that, and not for women’s sexual freedom.

Karve often tried to reconcile sexual freedom with birth control. He argued that venereal diseases and unwanted pregnancy were two hurdles in the path of sexual freedom and the latter was faced only by women and hence if that was removed, women would find it easier to achieve the sexual freedom. 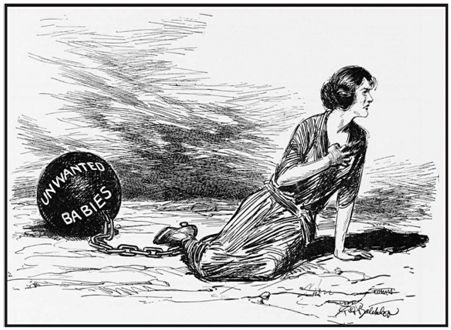 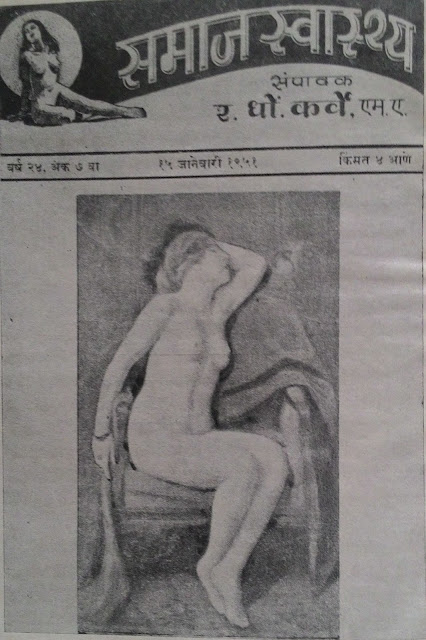 Is she Karve’s ‘Wonder Woman’ Sharda?

Sharda not only publicizes sexual freedom, she enjoys it too.

She has no hesitation in enjoying sex outside marriage. She is ready to live like Mahabharata’s  Draupadi if she ends up loving more than one man. She enjoys moving around naked at home. She asks women to enjoy as much sexual freedom as they get today and not wait for some revolution.

In the same essay, earlier, Dhond says: Karve used to advertise his book as ‘Key to Women’s Liberation’ (स्त्रियांच्या स्वातंत्र्याची गुरुकिल्ली) while Sanger’s book was titled ‘Family Limitation’. This difference in titles explains the difference in their approach.

Unfortunately Dhond got it very wrong when it came to Margaret Sanger. As we shall see soon, Sanger's approach was no different than Karve's (or the other way round).

Sanger believed in free love, which meant she believed in sex outside of marriage, and considered marriage itself a form of oppression.  She strongly believed that women’s equality and sexual autonomy were the only way forward for humanity. In the 1930s, Margaret Sanger was the best-known feminist in the world.
“When the history of our civilization is written, it will be a biological history and Margaret Sanger will be its heroine,” H. G. Wells predicted in 1935. (Sanger had decades-long affair with H. G. Wells). Like Karve she also had run-ins with the local law.

Sanger unlike Karve was a celebrity. In London, Sanger met with J L Nehru; in India, she debated Mahatma Gandhi. In 1937, she was featured in Time and the Nation; in Life, her life story was told in a four-page photo spread. It's likely her 'success' in contrast to his 'failure' was one of the reasons Karve became increasingly bitter.

William Moulton Marston (1893-1947) created Wonder Woman in December 1941. His partner was Olive Byrne.  Olive was the daughter of Ethel Byrne who opened the first birth-control clinic in the United States with her sister Margaret Sanger.

Marston has explained why he created a female superhero:
“A male hero, at best, lacks the qualities of maternal love and tenderness which are as essential to a normal child as the breath of life. Suppose your child’s ideal becomes a superman who uses his extraordinary power to help the weak. The most important ingredient in the human happiness recipe still is missing—love. It’s smart to be strong. It’s big to be generous. But it’s sissified, according to exclusively masculine rules, to be tender, loving, affectionate, and alluring. “Aw, that’s girl’s stuff!” snorts our young comics reader. “Who wants to be a girl?” And that’s the point; not even girls want to be girls so long as our feminine archetype lacks force, strength, power. Not wanting to be girls they don’t want to be tender, submissive, peace loving as good women are. Women’s strong qualities have become despised because of their weak ones. The obvious remedy is to create a feminine character with all the strength of Superman plus all the allure of a good and beautiful woman.”

Jill Lepore informs: “...Marston, who at a press conference in 1937 had predicted that women would rule the world, and had named Margaret Sanger as the second-most-important person on the planet (second only to Henry Ford), as measured by “contributions to humanity,” knew very well who he had in mind for a female superhero...”....Margaret Sanger! 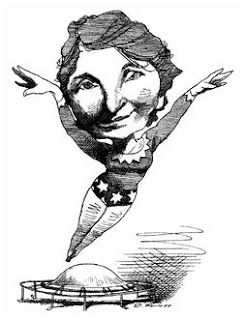 Look closer, Margaret Sanger is NOT bouncing off a trampoline but a springy contraceptive diaphragm

“The philosophy of Margaret Sanger’s ‘Woman and the New Race’ 1920 would turn out to be the philosophy of Wonder Woman, precisely.
With the beauty of Aphrodite, the wisdom of Athena, the strength of Hercules, and the speed of Mercury, she brings to America woman’s eternal gifts—love and wisdom! Defying the vicious intrigues of evil enemies and laughing gaily at all danger, Wonder Woman leads the invincible youth of America against the threatening forces of treachery, death, and destruction.

Women should rule the world, Sanger and Marston and (his wife) Holloway thought, because love is stronger than force...” 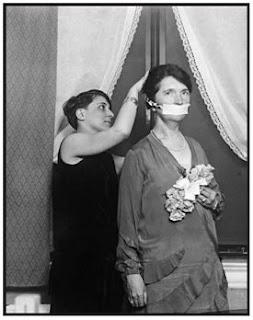 In 1929, when Margaret Sanger visited Boston to lecture at Ford Hall, city authorities banned her lecture, so she appeared on stage with a gag over her mouth 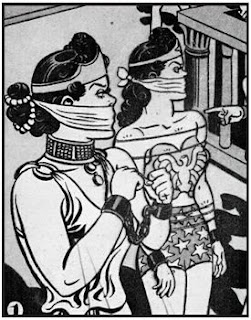 Wonder Woman and her mother gagged. From “The Four Dooms,” Wonder Woman #33 (February 1949)

Courtesy: The Library of Congress, Prints and Photographs Division

Karve and Sanger:
Although Sanger and Karve met only once at Mumbai in November 1935 at Sanger’s invitation, nothing significant seems to have come out of it. I would really like to know more about this meeting and what transpired between them. Has Karve written about it?

I also wonder if Karve knew Wonder Woman comics and, if he did, did he discuss it with Sanger?
Is Karve Still Too Hot To Handle?:

I think although India as a country can  claim some success in the area of family planning, I feel even in 2016 we as a society find it hard to accept Karve’s views on the futility of marriage as an institution,   desirability of sexual freedom and liberalism about all kinds of sexual acts.

Homosexuality is mostly a taboo subject in Indian civil society and for the government. Section 377 of the Indian Penal Code makes sex with persons of the same gender punishable by law.

In year 2016, Marathi newspapers went over the board reporting gravitational waves. They often get excited about any ‘significant’ scientific development or scientists in general.

But I have never read anything like what renowned American palaeontologist, evolutionary biologist, and historian of science Stephen Jay Gould says in the essay ‘Male Nipples and Clitoral Ripples’  in his book ‘Bully for Brontosaurus: Reflections in Natural History’, 1991:

“...As (Alfred) Kinsey had said earlier with his characteristic economy and candor: “The techniques of masturbation and of petting are more specifically calculated to effect orgasm than the techniques of coitus itself.”...
...Anatomy, physiology, and observed responses all agree. Why then do we identify an issue at all? Why, in particular, does the existence of clitoral orgasm seem so problematic? Why, for example, did Freud label clitoral orgasm as infantile and define feminine maturity as the shifting to an unattainable vaginal site?
Part of the reason, of course, must reside in simple male vanity. We (and I mean those of my sex, not the vague editorial pronoun) simply cannot abide the idea—though it flows from obvious biology—that a woman’s sexual pleasure might not arise most reliably as a direct result of our own coital efforts...”

There also was no word on a recent survey reported in Independent, UK on December 19 2015 that said:

I am sure Sharda would have had a lot to say about these surveys in her letters in Samajswathya!
Posted by Aniruddha G. Kulkarni at 9:00 AM

I wish this article is put on boards at every cinema hall n multiplex showing the wonder woman.i hope when my daughter's grow up to watch this movie I am able to establish this link between imagination and reality.

Thanks....There could not been a better compliment to this post than your comment...thanks again....