Cartoonists' Take On Groping and Grabbing (& Divided and Deluded) America


“‘I’m automatically attracted to beautiful women,’ he told NBC presenter Billy Bush. ‘I just start kissing them. It’s like a magnet. Just kiss. I don’t even wait. And when you’re a star they let you do it. You can do anything.. Grab them by the p***y. You can do anything.’”


“...Yet there was one huge problem: her husband Bill, sitting just a few yards away in the front row.


The world knows him as a brilliant politician, but also as a serial seducer of epic proportions who, while he was President of the United States, even had sexual relations with a young intern in the Oval Office.


In comparison to Bill, many view Trump as a choirboy when it comes to women.


Broaddrick claimed Bill Clinton raped her when he was Arkansas attorney general, and that Hillary intimidated her into silence when her husband launched his own bid to be president.


Willey was a former White House volunteer aide who alleges Bill Clinton sexually assaulted her during his first term as president.


Shelton was a 12-year-old rape victim whose attacker was defended by Hillary Clinton in her lawyer days. A tape later emerged showing Hillary chuckling when talking about the case and suggesting she knew her client was guilty. She used a legal technicality to get him a substantially reduced sentence....”


“...And for all his flaws, no one doubted that Nixon had the experience and the intelligence to be president.


By contrast, Mr Trump is manifestly unqualified and has thrown the US system into confusion, leaving the press and the Republican party floundering. The fact that more than 40 per cent of Americans, and a majority of whites, are probably going to vote for him suggests that the US is in deep trouble. We can, by now, all list the ingredients that have helped create this sickness — economic stagnation, inequality, illegal immigration, the rise of social media — but the outcome threatens the prestige of democracy worldwide.


If Mrs Clinton makes it to the White House there will be relief across the west and a certain disappointment in Moscow and, perhaps, Beijing. But it will be very hard to erase the memory of this campaign. It has presented an image of a troubled, divided and deluded US to the rest of the world. As a result, it has already dealt a serious blow to the prestige and power of the west.”

"One of America's most high profile couples, former California governor Arnold Schwarzenegger and wife Maria Shriver, have announced their separation after 25 years of marriage...During the 2003 elections to elect the next governor of California, reports surfaced about Schwarzenegger's lengthy history of groping women. At the time, Shriver defended her husband, helping him to victory..."

My post carried the following brilliant (and naughty) cartoon by Mike Luckovich:

Now Mr. Luckovich comes up with the following one: 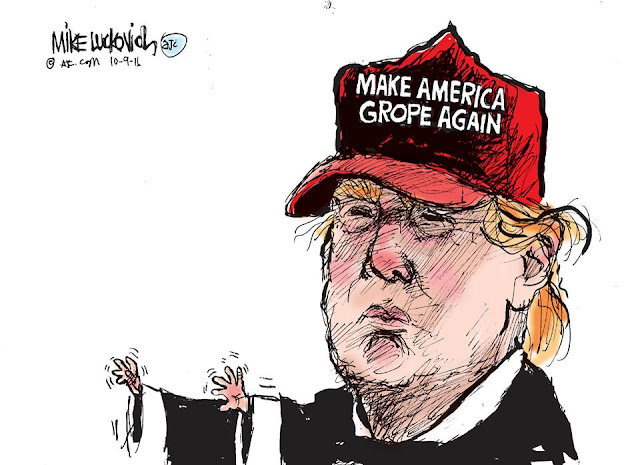 Both pictures courtesy: AJC and the artist