I Steal from Both: The Simpsons and Henry James

"No matter how many times you're reminded, you will always forget you're watching an animated show. Mr. Burns and Waylon Smithers, Principal Skinner and Groundskeeper Willie, Barney and Apu and Moe and Ned Flanders and Krusty the Clown (with his superb initial "K") will seem more real than any flesh-and-blood television family. More real, maybe, than your own family because life can't distill us quite so succinctly into our essences. For that, we need art. Which "The Simpsons" manifestly is."

My younger brother Bhaiyya (Abhimanyu अभिमन्यु ) - one of  Vasant Sarwate's  (वसंत सरवटे) and the late Vijay Tendulkar's (विजय तेंडुलकर) favourite cartoonists-   introduced me to The Simpsons more than a decade ago. And the life has never been the same again.

Since then I have often looked at the world through the eyes of  The Simpsons.

Whenever I get very critical of US and Americans- white and brown, I remember my indebtedness to that nation...She gave me 'The Simpsons' and Orson Welles...I forgive her and them...

As A O Scott says:

“I have long been of the opinion that the entire history of American popular culture — maybe even of Western civilization — amounts to little more than a long prelude to “The Simpsons."

And thanks to the globalization, instead of Western  civilization, we can just say middle-class life.

There of course was a similar family in my past: C V Joshi (चिं. वि. जोशी) created Chimanrao's (चिमणराव)  family. That family to me is as dear as  'The Simpsons'.

I have spent days reading and fantasizing about that family- how Chimanrao and co. might behave in a particular situation in my life.  TV serial based on it was good but not even close to the greatness of the original. You have to be Orson Welles or Yasujirō Ozu or Guru Dutt to capture its warmth on the TV screen!

In one of the greatest essays I have read in my life, 'Divine Comedy', Julian Gough writes:

“A comparison between The Simpsons and a soap opera is instructive. A soap opera is trapped inside the rules of the format; all soaps resemble each other (like psychologically plausible realist novels). What the makers of The Simpsons did was take a soap opera and put a frame around it: "this is a cartoon about a soap opera." This freed them from the need to map its event-rate on to real life: they could map its event-rate on to cartoon life. A fast event-rate is inherently comic, so the tone is, of necessity, comic. But that is not to say it isn't serious. The Simpsons is profoundly serious. And profoundly comic. Like Aristophanes, debating the war between Athens and Sparta by writing about a sex strike by the women of Athens and beyond.

With its cartoon event-rate, a classic series of The Simpsons has more ideas over a broader cultural range than any novel written the same year. The speed, the density of information, the range of reference; the quantity, quality and rich humanity of the jokes—they make almost all contemporary novels seem slow, dour, monotonous and almost empty of ideas.

So steal from The Simpsons, not Henry James."

I steal from both!

I may yet fail but no one can blame me for not stealing! 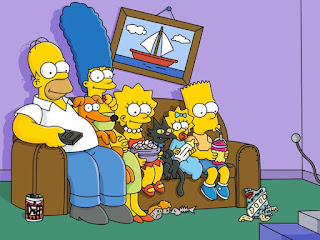 Look at the picture. It's a treasure trove. Look at the frame on the wall...Duff beer can, fish skeleton,  cupcakes on the carpet, TV remote, cat and dog sharing premium space on couch...Healthy food in Lisa's hands and junk in Bart's...How happy they look together...