Even in neglect, Tolstoy looks majestic

AN Wilson: Is there a vanity, almost a frivolity in the anarchist-pacifist position? In view of the later excesses of Stalin and Hitler, the passing of Tolstoy in 1910 can seem like the sad death of a utopian dream. But the story of South Africa – to choose but one example – demonstrates the vigour and strength of the Tolstoyan idea. It was in South Africa that Gandhi first became enflamed by Tolstoy’s writings and began to put in practice the policy of passive resistance that would eventually defeat the British empire.

David Brooks: As a novelist, Tolstoy was an unsurpassed observer. But he found that life unfulfilling. As he set out to improve the world, his ability to perceive it deteriorated. Instead of conforming his ideas to the particularities of existence, he conformed his perception of reality to his vision for the world. He preached universal love but seemed oblivious to the violence he was doing to his family.

There is hardly anything original being done in India to mark the death centenary year of Leo Tolstoy.

That does not surprise me but I was shocked to read this:

"A century ago, all of Russia mourned Leo Tolstoy's death at a backwater train station. But today the novelist and pacifist, who abhorred any form of government, is more respected in the West than his home country.

The centennial of Tolstoy's death, 100 years ago Saturday, seems to be passing virtually unnoticed in Russia..." (AFP)

But I was very impressed see this monument. 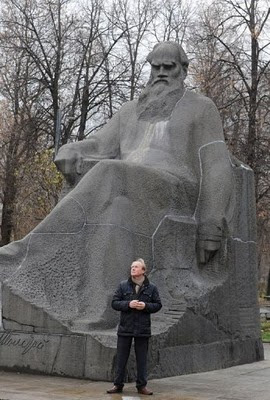 I bought 'War and Peace' long ago and I have yet to start reading it. I have read a lot about Tolstoy but not much by him.

A man from the land of Warkaris like me should be able to relate to them. Sure but only when he decides to take out the book from the bottom of the pile of unread books! Maybe a newspaper or TV strike will help. 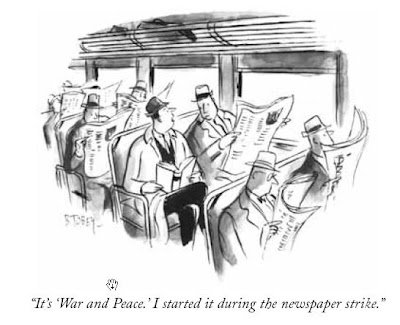 I was moved by A N Wilson's tribute to him: "From the first reading of War and Peace, it becomes clear that Tolstoy writes with the breadth and scope of Homer. Nowhere outside the Iliad do we find such a prodigious combination of artistic detachment from joy and suffering and yet at the same time such passionate engagement and sympathy. It is a paradoxical truth in these two European masterpieces, and Bartlett’s book gives us the sense of how both these godlike qualities, of indifference and empathy, were constantly present in Tolstoy’s soul." (FT, Nov 19 2010)

"...It pained Sonya throughout her life that her only real hold on Tolstoy was sexual—neither her thoughts nor her desires kept his attention—and it pained her even more when that hold loosened. She herself never enjoyed making love, but when finally, in significant old age, he stopped coming to her, she was beside herself with shame, loss, longing. So often, throughout their years together, he had bolted, leaving her entirely alone—sometimes even when he was in the house—for days or weeks on end (her diary often reports an unspeakable loneliness). Yet she had gone on dreaming that ultimately she would have Tolstoy’s friendship and tender regard. When the sex went, and the friendship did not blossom, she grew desolate.

In the end the mixed nature of humanity itself proves the source of the great existential drama. To be mean and generous, depraved and decent, loving and murderous, not by turns but all at once—that, it seems, is the true burden of our existence. It is this humiliation that makes us rage at the heavens, this humiliation that has ever demanded of us some over-arching myth of redemption that will atone for the despair of our own self-divisions..."

In Marathi culture I have often heard people expressing satisfaction, even joy, after a person's passing, that his/her last days were spent well, perhaps in happiness.

I have never understood this focus on "last days".

"...Fleeing from his home and wife of 48 years with just 50 rubles in his pocket, 82-year Tolstoy rushed from one monastery to another before catching a cold on a train and dying at a small train station in Astapovo, Lipetsk region..." (AFP)
Posted by Aniruddha G. Kulkarni at 9:00 AM