Nutan is one of the greatest actors I have seen. (Frankly, it goes beyond acting. When I was 14 or 15, after watching her in Anari, made before I was even borne, at Madhav माधव talkies in Miraj मिरज, I wanted to marry her! She of my father's age!)

I had never seen Aakhri Dao (1958), an imminently forgettable film, until recently. I mention the film only because of two things- Madan Mohan's music and Nutan's acting. (A lot of Hindi films of 1950's were as lousy as most films of today. The only difference is the quality of music and a Nutan here and a Balraj Sahni there.)

Watch video of 'tujhe kya sunao main dilruba', a song from the film, on You Tube here.

I was stunned by the journey of Nutan's face in those 3 min 34 secs.

She goads her co-actor Shekhar into singing a song. He obliges. Now, although she is well aware of his feelings for her, she is balled over by the display of affection by him in front of all her friends.

Look at very awkward Nutan's fidgeting for first 1 min 45 secs or so. It's an absolute delight.

And then it all changes.

As the third stanza is about to begin, Shammi, quite wisely, troops out with all the girls. But it doesn't matter because Nutan doesn't even notice it. She now has gone into an acting trance where few can go.

Look at her eyes. Tears have welled up there. They don't look glycerine induced to me. I just drown in them.

All the superlative talent of Mohammed Rafi, Madan Mohan and Majrooh Sultanpuri combined is only second to the genius I see on the screen. 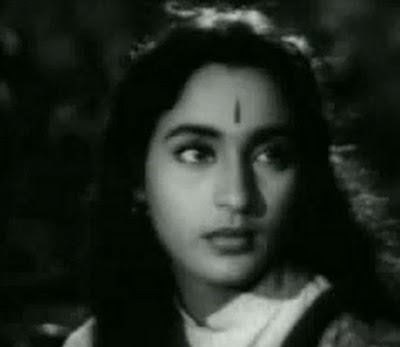 If I had a say, I would put a dot bindi, or no bindi at all, on her forehead instead of this elongated one.
Posted by Aniruddha G. Kulkarni at 9:00 AM

Thanks for writing about one of my favorite yester year personality. I am always more biased towards Madhubala, but Nutan had perfpectly photogenic face. My favorite songs of hers ( in addition to ones you quoted) - Savan Ka Mahina.