Leo Cullum, I think I'd never laugh again. Then I'll see your drawings...

Adam Philips: 'The world without the people who matter to us is not the same world and so not the world at all. Life becomes progressively stranger as we get older - and we become increasingly frantic to keep it familiar, to keep it in order - because people keep changing the world for us by dying out.'

Leo Cullum whose pictures gave me great joy died on Oct 23 2010 at the age of 68. To see many of his cartoons, please visit The Cartoon Bank of New Yorker here.

68 is a dreaded number for me because my mother too died at that age. These days my vanished world is divided between those who die at or before 68 and those who die later.

In 2008-09, I attempted writing a caption for six of his cartoons as a part of The New Yorker's “Cartoon Caption Contest”. You can find those efforts on this blog.

I thought his pictures were like deceptively simple puzzles. Visually very funny, they tickled me...I would start smiling just looking at the 'frog' eyes of his characters...I thought the caption would now just pour out of me.

I didn't know how Mr. Cullum looked. I thought he looked like one of his own characters. For instance, like either of them below. 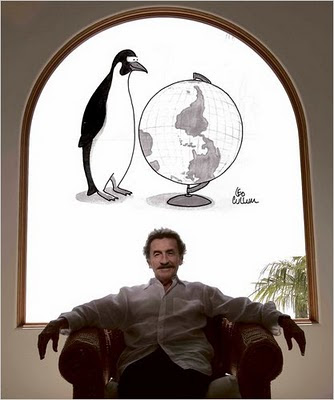 "...In the aftermath of the 9/11 attacks, Mr. Cullum managed the delicate feat of finding humor when the prevailing national mood was black. The issue of The New Yorker that came out immediately after the attacks carried no cartoons, but Mr. Cullum’s was the first cartoon that the magazine’s readers saw the following week..." (The New York Times, Oct 25 2010) 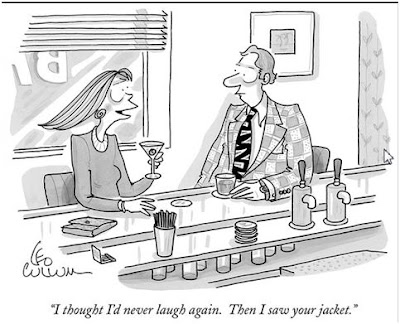 Such is the life of a clown.

And perhpas a cartoonist.

"...In 1966 he was sent to Vietnam, where he flew 200 missions, most in support of ground-troop operations, but at one point he flew secret bombing runs over the Ho Chi Minh Trail in Laos. “Who these were secret from I’m still not sure,” Mr. Cullum told Holy Cross magazine in 2006. “The North Vietnamese certainly knew it wasn’t the Swiss bombing them.”..."
Posted by Aniruddha G. Kulkarni at 9:00 AM