Waman Kendre (वामन केंद्रे) is supposed to be very good in the art of theatre direction.

I haven't seen anything by him yet for which I feel bad. But what the hell...I haven't still read even one line from Eknath's (एकनाथ) "Bhagwat" (भागवत) . So much to do, so little time...

Do I understand anything called theatre? I think not.

But I like compositions- "The spatial property resulting from the arrangement of parts in relation to each other and to the whole."

I felt moved by following composition from Kendre's play. 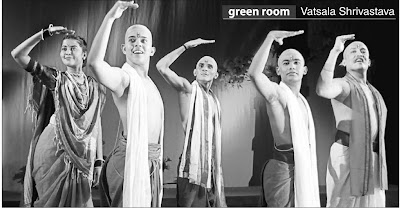 It's a great pity that I have neither read or seen a single full length play of great Bhasa who earlier appears on this blog here and there.

Kendre's 'Madhyam Vyayog' brought to my mind when I was last moved by a similar theatrical composition.

When I first saw it, I couldn't take my eyes off the following picture. Even today it shakes me. What are they going to do next? 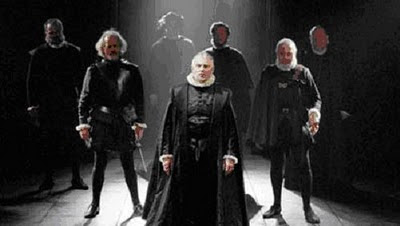 This is from FRIEDRICH SCHILLER's German epic “Don Carlos” directed by Michael Grandage.

The Economist (Feb 17th 2005) did one of the most impressive art reviews I have read.

"Whatever you do, don't miss “Don Carlos”...“Don Carlos” was written two years before the French revolution, and the good men belong to that time. Carlos, the king's son, and his friend the Marquis of Posa favour humanity, liberty and freedom of speech. Posa almost persuades Phillip of the case for freedom. But, true to history, when the curtain falls, the good men have lost. The dramatic climax is the entrance of the real villain—the imposing, sinister figure of the Inquisitor, clothed in a cardinal's scarlet. When he instructs the king in his duty to God and the Roman Catholic church, Phillip does his bidding—but Schiller has made the case against tyranny. Mr Grandage declares that the message rings no less true, and is no less relevant, on Shaftesbury Avenue in 2005..."
Posted by Aniruddha G. Kulkarni at 9:00 AM