Mahatma Gandhi translated a few of Tukaram's poems when he was jailed in Yerwada in 1930.

One of them reads in Marathi:

"Wherever I go, Thou art my companion. Having taken me by the hand Thou movest me.
I go alone depending solely on Thee. Thou bearest too my burdens."

Tukaram.com also has its translation in Rajasthani:

The key phrase in the poem is 'to accompany'. "Taking by hand" is less important.

One of the greatest books, "Don Quixote", was written in Spanish c 1605-1615. Tukaram was already borne and perhaps writing.

Terry Castle informs that there is a phrase "...used in Spain to console someone: "Te acompaño en tu pesar"—"I accompany you in your sorrow.""

Castle continues:"...At the deepest level Don Quixote is about accompanying someone and being accompanied in turn..."

For me the most moving sequence of Richard Attenborough's Gandhi is the Dandi March. The way the March gathered strength. People kept joining in. In total silence.

They were accompanying and being accompanied in turn!

Last year, for the first time, I read D B Mokashi's (दि. बा. मोकाशी)- 20th century Marathi's foremost existentialist- Palkhi 1964 (पालखी). What a read! It describes how such an exercise transforms even a skeptic. Outsider in the end belongs.

Yesterday I finished reading Cormac Mccarthy's masterly and numbing 'The Road'. In apocalyptic times, father and son come closer. Thanks to a journey together. 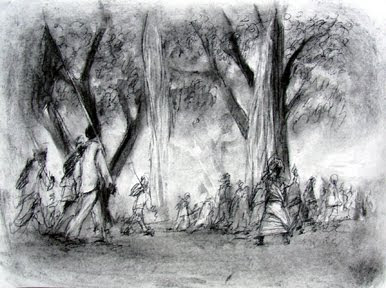 To view more such pictures click here.
Posted by Aniruddha G. Kulkarni at 9:00 AM