Are you ready for Eternity?

Anton Chekhov in 'The Three Sisters' (Tri sestry), 1901: "Well, maybe we’ll fly in balloons, the cut of jackets will be different, we’ll have discovered a sixth sense, maybe even developed it - I don’t know. But life will be the same - difficult, full of unknowns, and happy. In a thousand years, just like today, people will sigh and say, oh, how hard it is to be alive. They’ll still be scared of death, and won’t want to die.”

(Mahabharat 1/1/247: Living and death, happiness and sadness all originate in time.)

“All the tragedies which we can imagine return in the end to the one and only tragedy: the passage of time.”

"So this means that in a sense, the present past and future are out there, and that also gives us a very deterministic view of the world. We have no control of what happens in the future because its all laid out. I think the trouble that people have with this idea is that you think the future is under your control, to some degree, and so this means that if the future's laid out then in a sense its not under your control. 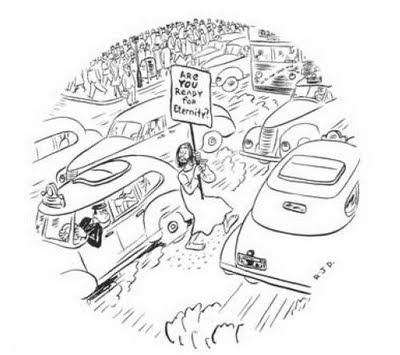 Mark Twain has tried to answer the question:

"I do not fear death, in view of the fact that I had been dead for billions and billions of years before I was born, and had not suffered the slightest inconvenience from it."
Posted by Aniruddha G. Kulkarni at 9:00 AM