So oft in cultural wars, the disputants rail on in utter ignorance

John Godfrey Saxe's (1816-1887) poem on the famous Indian parable "The Blindmen and the Elephant" concludes like his:

"...And so these men of Hindustan
Disputed loud and long,
Each in his own opinion
Exceeding stiff and strong,
Though each was partly in the right
And all were in the wrong.

So oft in theologic wars,
The disputants, I ween,
Rail on in utter ignorance
Of what each other mean,
And prate about an Elephant
Not one of them has seen!"

In 21st century Maharashtra, I see all around, men of Hindustan, first disputing loud and long, and then fighting 'theologic' and cultural wars, railing on in utter ignorance.

The original print is reproduced at the end of my commentary and Sarwate's picture is embedded at the bottom of the post.

Wielding a sketch pen in one hand and a sword in the other, the artists in Sarwate's picture are ready to slit each other's throat to make their own perception prevail.

In fact, the sketch pens in their hands, which look more like spears than drawing instruments, seem so ferocious that they remind me of a chilling scene from Batman (1989) when the joker proves the adage "the pen is truly mightier than the sword"!

Killer weapons in their hands make a poignant comment on the current intolerant environment towards art (and artistic freedom) and history in Maharashtra.

No wonder Shiv Visvanathan observes: "Three great modernised societies in India — Maharashtra, Karnataka and Gujarat — are deep in the throes of rightist groups who use bans as a way of sustaining politics."

(Some people say Bal Thackeray and Raj Thackeray are artists first and then politicos. I wonder if the two artists in the picture are them because both claim to understand "Marathi culture" better than the other.)

Have the artists from Sarwate's picture seen the "elephant"?

Commenting on his own picture Escher said: "In the horizontal center strip there are birds and fish equivalent to each other. We associate flying with sky, and so for each of the black birds the sky in which it is flying is formed by the four white fish which encircle it. Similarly swimming makes us think of water, and therefore the four black birds that surround a fish become the water in which it swims."

This print has been used in physics, geology, chemistry, and in psychology for the study of visual perception.

GILBERT ADAIR: "...M. C. Escher, the Dutch-born graphic artist whose images of endlessly diminishing birds, fish and lizards, the tiniest of them bunched up at the edges of the picture frame, constitute a remarkable approximation of the counter- intuitive results obtained by adding up an infinite series of fractions (e.g. 1+1/2+1/4+ 1/8+1/16 … equals not infinity but 2)..."

I guess it's the first time it has been used in a cartoon.

To appreciate full esthetic value of 'Sky and Water I', see a short film by National Film Board of Canada on youtube here. 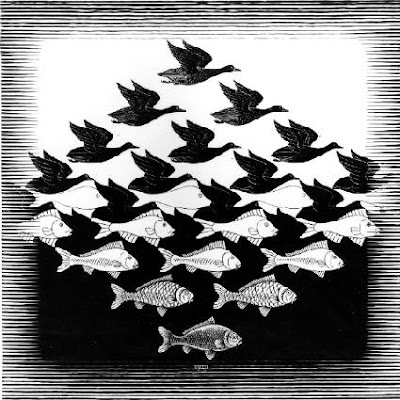 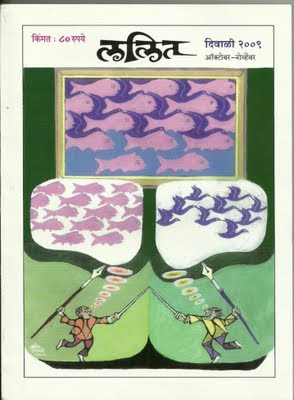 (notice Sarwate's use of colours instead of Escher's B & W, warrior on the left is made of curves and one of the right of straight lines, only top three rows have fish-water/bird-air...)

Click on the respective years to see Sarwate's covers of Lalit Diwali 2008 and 2007.
Posted by Aniruddha G. Kulkarni at 9:00 AM

I appreciate your post which highlights and gives so much coverage to Shri. Vasantrao saravate from time to time. Granthali had arranged his interview with Avadhut Paralkar & Prashant Kulkarni in Dadar, Mumbai some months before.Vasantrao was very open and did not hesitate to tell his memoirs of Kolhapur. Thanks a lot.
Mangesh

I don't give the coverage.

VS gets it because he is one of the very best India produced in 20th century.

The information here is great. I will invite my friends here.

Thanks anon for saying this.