You are Not-out, David Shepherd

Watching a good cricket test match is like reading a good novel. Many actors and situations.

One such actor was the late David Shepherd.

I enjoyed watching David Shepherd as much I did watching players.

I remember a test match in Melbourne, Australia in December 1999.

It was Brett Lee's debut test.

Peter Roebuck wrote: "This was a day to remember, a day on which Brett Lee made a startling first appearance in his country's colors and Sachin Tendulkar stood alone at the crease defying formidable odds with courage and skill.

It was a glorious confrontation between old and new, mighty and promising, an expression of the great gifts of the game, the brilliance of batsmanship, the excitement of pace and the powers needed to reach the gods. Meanwhile, a superb leg-spinner (Shane Warne) also bowled with artistry and cunning as he pursued his own landmark. It wasn't a day to have stayed in bed. There haven't been many better...

...When Tendulkar reached his 100, the entire crowd rose in acclamation. His dismissal, caught on the boundary, brought the crowd to its feet a second time.
It had been the perfect day. The visiting champion had scored a century. And a new fast bowler had arrived on the scene."

That was India's first innings.

In second innings, his back against the wall, Tendulkar was playing Shane Warne beautifully but a touch nervously.

In the end Warne prevailed by getting him out LBW.

David Shepherd was the umpire. He had watched the confrontation of the two masters from the close and probably made the correct decision in the end.

While Shepherd enjoyed two masters at work, I enjoyed three! 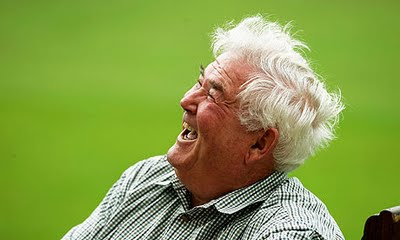