“The annual budget of the temple administration of Tirumala Tirupati Devasthanams (TTD) has almost touched the Rs 1,000-crore mark. But, interestingly, the country's richest religious body also happens to be the biggest tax-evader in Andhra Pradesh.

The temple management owes Rs 5 crore each to the Tirupati Urban Development Authority (TUDA) and the Tirupati Municipal Corporation (TMC), besides Rs 19-crore tax to the state government for human hair sale…

However, the temple administration is 'casual' about tax evasion and argues that as it is a renowned dharmic institute, it should be granted an exemption…”

An investigation by the Government Accountability Office found that almost two-thirds of companies in the United States usually pay no corporate income taxes. Big companies, those with more than $50 million in sales or $250 million in assets, are less likely to avoid Uncle Sam altogether. Still, about a quarter of them report no tax liability either…

We find it hard to believe that some two-thirds of American companies fail to turn a profit. What we find easier to believe is that corporations have become increasingly skilled at tax-avoidance strategies, including transfer pricing — overcharging their American units for products and services provided by subsidiaries abroad to artificially reduce their profits here.

Even as corporate profits have soared — reaching a record of 14.1 percent of the nation’s total income in 2006 — the percentage of these profits paid out in taxes is near its lowest level since the 1930s…”

"Jaya coughs up Rs 2.5cr: Filmstar-turned-Samajwadi MP Jaya Prada coughed up Rs 2.5 crores to the Chennai City Corporation to get herself declared "solvent" because the corporation had declared her and some of her family members insolvent after she refused to pay fines levied by it.

Had she remained insolvent, Ms Jaya Prada would have lost her Lok Sabha seat. These fines were levied as she and her two brothers failed to pay local taxes for two cinema halls, Raj theatre and Jayaprada theatre on Mount Road.

Last week, Ms Jaya Prada declared herself insolvent to avoid coughing up the tax and going to jail. But she took a U-turn soon after realising that an insolvent person cannot be an MP under Article 102 (1) C of the Constitution.”

Poor Jaya Prada. She should learn from Tirumala Tirupati Devasthanams, American corporates and many other rich Indians how to avoid taxes successfully. 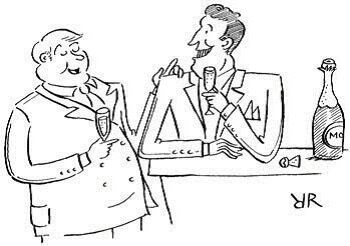 ‘Only two certainties in life, Miles: death and tax avoidance.’


Artist: Spectator
Posted by Aniruddha G. Kulkarni at 9:00 AM