Phillips Rodny Associates (and many of us) are now in Bunge

John Kay said: “…what we need is a term for the opposite of a bubble….bubbles are puffed up, not puffed down. That is why we need a phrase to describe the anti-bubble..”, asked readers to try and annouced a prize for the best entry. (FT June 24, 2008)

I participated with an entry ‘elbbub’, produced as al-boob. I lost although Kay says I would have won if Keynes’ rules were applied.

“…But under Keynes’ rules the runaway winner would have been elbbub – bubble reversed – and that did not quite do it for me. So I decided to seek fundamental value rather than be carried away by market momentum…But the most compelling image is surely the bungee. You are in free fall. You expect that fall will end and reverse before you hit the ground, but you do not know when. And bungee jumping offers the same kind of immature pleasure as blowing bubbles in the air…But bungee is the cord, not the process… And congratulations to Iain Martin for his winning entry – the bunge…” (FT July 1, 2008) 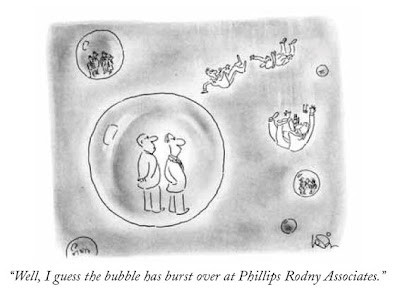 My caption: "Well, I guess Phillips Rodny Associates are now in bunge."
Posted by Aniruddha G. Kulkarni at 10:00 AM