Can Language Overpower Caste in Maharashtra?

“…The demise of the old technology is confidently predicted, and indeed it may lose ground to the insurgent, as mainframes did to the personal computer. But the old technology or business often finds a sustainable, profitable life. Television, for example, was supposed to kill radio, and movies, for that matter. Cars, trucks and planes spelled the death of railways. A current death-knell forecast is that the Web will kill print media.

What are the common traits of survivor technologies? First, it seems, there is a core technology requirement: there must be some enduring advantage in the old technology that is not entirely supplanted by the new. But beyond that, it is the business decisions that matter most: investing to retool the traditional technology, adopting a new business model and nurturing a support network of loyal customers, industry partners and skilled workers…

… To survive, technologies must evolve, much as animal species do in nature. Indeed, John Steele Gordon, a business historian and author, observes that there are striking similarities in the evolutionary process of markets and biological ecosystems. Dinosaurs, he notes, may be long gone, victims of a change in climate that better suited mammals. But smaller reptiles evolved and survived, and today there are more than 8,000 species of reptiles, mainly lizards and snakes, compared with about 5,400 species of mammals. ..”

Mr. Raj Thackeray, a marketing wizard, knows what is true of technologies is also true of ideologies.

Few years ago his uncle Mr. Bal Thackeray increased his party’s focus on Hindutva. The nephew has been quick to seize the opportunity. His speech on May 3, 2008 is an example of clever positioning of his party for upcoming polls.

However Raj Thackeray has not accounted for one major hurdle in his calculations: increasing role of caste in the politics of Maharashtra. During no other period of 20th century, caste became as vicious in Maharashtra as it is today. In the past state or national level leaders from Maharashtra never so openly espoused caste.

Even saint Samarth Ramdas continues to be a target. See cartoon below from year 1969 and news item dated May 2008 from Marathi newspaper Pudhari .

Debate still rages if indeed Samarth, a Brahmin, was Shivaji’s guru or not. We are ready to live with many other myths that masquerade as Indian history but not this one. The news item below says experts from reputed institutions (fearing backlash) are refusing to give their views on the subject.

It’s never enough to know that these two greats were contemporaries and by far the best writing on Shivaji has been done by Samarth. 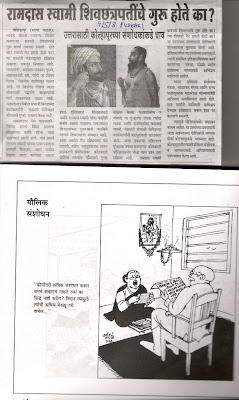 Old Lady: “Why doesn’t someone prove by doing more research that Samarth was not a Brahmin? At least that will save him from more opprobrium.”

Vasant Sarwate (1969) sourced from his latest book "The Best of Sarwate" editor: Avadhoot Paralkar, Lokvangmay Gruh 2008
Posted by Aniruddha G. Kulkarni at 10:30 AM