Defying Gravitas; Jumping for the Sheer Joy of Cricket

I have an old Life magazine issue that has few pictures of celebrities jumping at the command of American portrait photographer Philippe Halsman.

Halsman used to say, "When you ask a person to jump, his attention is mostly directed toward the act of jumping and the mask falls so that the real person appears." The photographer developed a philosophy of jump photography, which he called jumpology.He published Philippe Halsman's Jump Book in 1959 (see picture below), which contained a tongue-in-cheek discussion of jumpology and 178 photographs of celebrity jumpers.”

Halsman, who had 101 Life covers to his credit when he died in 1979, felt a portrait that did not show psychological insight was "an empty likeness" of its subject. Richard Nixon, Aldous Huxley, Marilyn Monroe, Rodgers and Hammerstein, Dr. J. Robert Oppenheimer and the Duke and Duchess of Windsor are among the celebrities he launches into orbit.

“The freezing of motion has a long and fascinating history in photography, whether of sports, fashion or war. But rarely has stop-action been used in the unlikely, whimsical and often mischievous ways that Philippe Halsman employed it…

… Portraiture is one of the greatest challenges in photography, because the human face is elusive and often mask-like, with practiced expressions for the standard range of emotions. Some photographers accept these preset expressions—think of annual-report portraits of corporate officers—and others try to eliminate expression altogether, to get a picture as neutral as a wanted poster. Halsman was determined to show his sitters with their masks off but their true selves in place…”

I wonder what Halsman would have made of R P Singh who seems to jump with such unalloyed joy and no touch of malice. 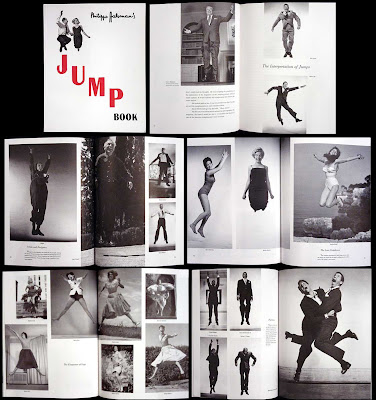 RP Singh after getting through Adam Gilchrist, Australia vs India, 3rd Test, Perth, 2nd day, January 17, 2008
Posted by Aniruddha G. Kulkarni at 6:30 AM