Legs of God Hoofing the Ball into the Night Sky

Indian newspapers on February 1, 2008 reported:”Maradona sorry for ‘Hand of God’”.

I watched that match of 1986 world cup- England Vs. Argentina- live on TV, courtesy my sports crazy friend V Parameswaran.

No exaggeration, I haven’t seen a better football match than that. Thank you, Param.

In one of the best essays- “My hope for a tortured genius”- I have read, Gary Lineker, Maradona’s rival, wrote:

“…He was a footballing genius and the best player of my lifetime. I know everyone talks about Pele and George Best but they came a bit early for me and of the players I watched, Maradona was head and shoulders above anything else I saw.

During my days at Barcelona, I was picked to play alongside him for a Rest of the World XI against an English League team and as we warmed up he hoofed the ball into the night sky as high as he could. When it came down, he trapped it perfectly on his left foot. An interesting little party piece, you might think. But he did it again and again and again, perhaps 13 times in all, each time kicking it as high as he could. Believe me, that is near-impossible but I stood there watching with Michel Platini, who was a pretty special player himself. Yet even he was open-mouthed, in awe of the magnificence of what he was seeing.

He will always be remembered for the Hand-of-God goal (see picture below on the left) against England in the 1986 World Cup. But I played in that game and I feel no bitterness.

We’ve seen players get away with a bit of skulduggery and I would say the referee and linesman should take the blame. You would hardly expect Maradona to own up to punching the ball in. From my customary position, just inside the halfway line, I did not see it because there were too many bodies in the way.

In my mind, Maradona should be remembered more for that sublime second goal. What sticks in my mind about that match was the pitch being just big lumps of turf. It was all but unplayable and when you tried to turn, the whole pitch seemed to turn with you. But for a genius nothing was impossible and as I again stood in my customary position, I had a perfect view as he received the ball, controlled it with one touch, turned perfectly and accelerated past the first English player.

The rest, as they say, is history but whatever people think about his handled goal, they ought to give him credit for the second one (see picture below on the right) that day. It was a magnificent run and a magnificent finish. Sometimes, no matter how disappointed you feel as a player, you have to accept that a goal is simply brilliant and unstoppable, and give credit to the opposition. It was so unbelievable that I actually felt like applauding, though naturally I didn’t. Argentina were a better side than us in 1986 — we reached our peak in 1990 — and though it was not a one-man World Cup, it was as close as you can get…” (April 26, 2004) 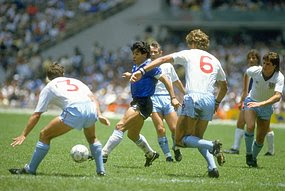 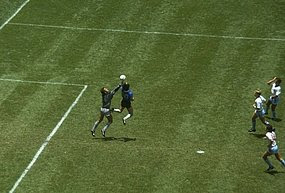