What is the Name of Your Stuffed Toy Tiger, Shoaib Akhtar?

Read above on lines of the famous dialogue from blockbuster Hindi film Sholay (1975):

November 16, 2007, Hindustan Times reported: “Pakistani fast bowler Shoaib Akhtar has expressed a desire to meet Bollywood star Sanjay Dutt, who is in a jail in Pune.”

He may be interested in meeting Deepika Padukone too.

Cricket will increasingly meet Hindi film industry. Cricket will just be an entertainment, in not too distant future.

It’s hardly competitive anymore. Compared to the past, Pakistan, Wes Indies, England (81 all out against SL on Dec 20!), New Zealand cricket are in decline. It leaves only Australia, Sri Lanka, South Africa in South Africa and India in fray.

“If one were to say that Pakistan cricket is going the West Indies way - into a sharp decline - it would certainly rankle across the border. But ask former captain, the magnificent Imran Khan, and he would tell you that it was always coming and that too because the country's domestic cricket has always been in the doldrums…”

In the past, playing Pakistan was next only to playing fiery West Indies.

I remember watching on television Pakistan –India test match played on December 23-28, 1982 at Karachi. In Indian second innings, Imran Khan bowled an unplayable spell. India were at 102 for 1 to be bowled out in 197. G R Viswanath and Sandip Patil- both out on ducks- looked as of they didn’t see Imran’s deliveries. Or think of "death in the afternoon" for Rahul Dravid and Sachin Tendulkar on Shoaib's deliveries at Kolkata in 1999...

But as an entertainment, cricket has a big role to play.

Michael Crichton (Timeline):
"In other centuries, human beings wanted to be saved, or improved, or freed, or educated. But in our century, they want to be entertained. The great fear is not of disease or death, but of boredom. A sense of time on our hands, a sense of nothing to do. A sense that we are not amused.”

As I write part of this post on December 12, 2007, Pakistan and India are playing a dreary test match at Bangalore on a “pata” (stone) wicket where so-called Rawalpindi Express Shoaib Akhtar has made no impression.

He is busy showing his soft side, a la Jack Nicholson in "As Good As It Gets". 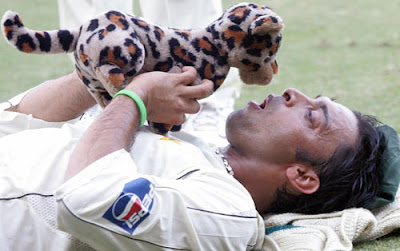 Yes, he is on cricket ground. Looks well-built like Keith Miller. But he doesn't bowl. He's stuffed. 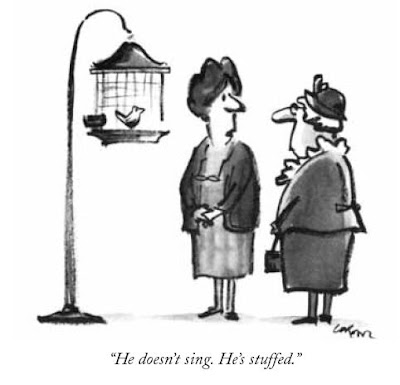