Tom and Jerry in Stone. At Mamallapuram, 1300 Years ago.

Frontline January 4, 2008 has a story on Mamallapuram (Mahabalipuram) as 10th part of a 25-part series on Indian art.

Three things I enjoyed most about my stay in Madras were- affordable and efficient Pallavan Transport Corporation, IIT campus and above all Mamallapuram.

I went to Mamallapuram a few times. Its beauty is ethereal because "In Indic vision, there is no marked division between the divine and the earthly. All that there is, is sacred. There is a grace that underlies all that there is. Our response to that grace when we see it is considered to be a moment when we get a glimpse of the Truth. Bringing this realisation to us is the purpose of Indian art. All forms and all deities are a means towards the realisation of the inherent unity of the whole of creation."

But this is true of many other places in India.

What stands out most for me there is the carving I call the original Tom & Jerry.

Frontline describes it as : "...On the opposite bank is a charming depiction of a cat performing penance. He has deluded some mice into believing that he is an ascetic. This could be a story from the Mahabharata in which a sad fate overtakes the trusting mice. It could also be a witty comment being made by the artists on hypocrisy in contemporary practices..."

I say : cat is performing penance, therefore it can't move and hence mice are pulling its leg. Just like Tom & Jerry.

I have often wondered what it must have been when architects and builders conceived this humour in hard grey granite. I wish I were at the table!

For me, it depicts the uncomplicated sense of humour of Tamil people- arguably the funniest people in India- who have a rare capacity to laugh at themselves and to discover humour in everyday mundane situations. It's no coincidence that much imitated Nagesh is probably the greatest comic actor India produced.

Here it is in stone, not in celluloid: 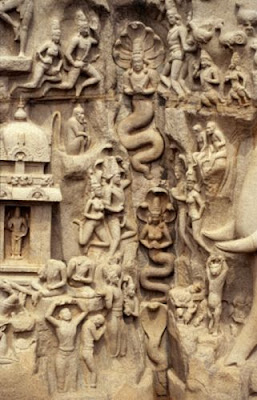 And after Tom's penance was over, this happened... 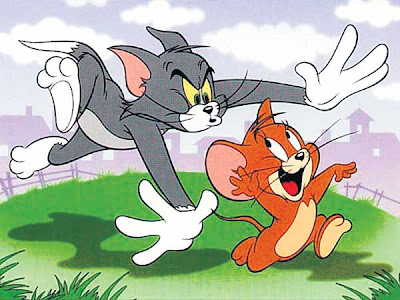 Posted by Aniruddha G. Kulkarni at 9:15 AM