Julian Barnes, 'A History of the World in 10 1/2 Chapters', 1989:
“...Even before the waters rose there had been grounds for unease. I know your species tends to look down on our world, considering it brutal, cannibalistic and deceitful (though you might acknowledge the argument that this makes us closer to you rather than more distant). But among us there had always been, from the beginning, a sense of equality. Oh, to be sure, we ate one another, and so on; the weaker species knew all too well what to expect if they crossed the path of something that was both bigger and hungry. But we merely recognized this as being the way of things. The fact that one animal was capable of killing another did not make the first animal superior to the second; merely more dangerous. Perhaps this is a concept difficult for you to grasp, but there was a mutual respect amongst us. Eating another animal was not grounds for despising it; and being eaten did not instill in the victim – or the victim’s family – any exaggerated admiration for the dining species.

Noah – or Noah’s God – changed all that. If you had a Fall, so did we. But we were pushed. It was when the selections were being made for the Compound of the Chosen that we first noticed it. All this stuff about two of everything was true (and you could see it made a certain basic sense); but it wasn’t the end of the matter. In the Compound we began to notice that some species had been whittled down not to a couple but to seven (again, this obsession with sevens). At first we thought the extra five might be travelling reserves in case the original pair fell sick. But then it slowly began to emerge. Noah – or Noah’s God – had decreed that there were two classes of beast: the clean and the unclean. Clean animals got into the Ark by sevens; the unclean by twos...” 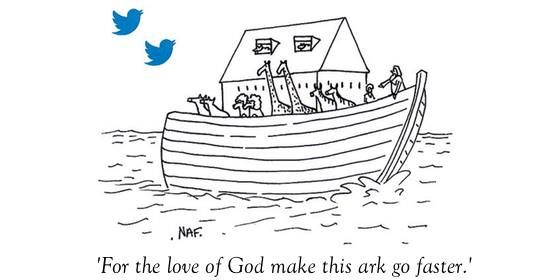