J. G. Ballard, 'Atrocity Exhibition', 1970:
"Were her breasts too large? No, as far as one can tell, but they loomed across the horizons of popular consciousness along with those of Marilyn Monroe and Jayne Mansfield. Beyond our physical touch, the breasts of these screen actresses incite our imaginations to explore and reshape them. The bodies of these extraordinary women form a kit of spare parts, a set of mental mannequins that resemble Bellmer’s obscene dolls. As they tease us, so we begin to dismantle them, removing sections of a smile, a leg stance, an enticing cleavage. The parts are interchangeable, like the operations we imagine performing on these untouchable women, as endlessly variable as the colours silkscreened on to the faces of Warhol’s Liz and Marilyn."

Margaret Anne Doody, London Review of Books, June 1997:
"...In the period after World War Two, by contrast, and especially throughout the Fifties, women had to try to pad out their breasts, to match the attractions of bosomy stars like Rosalind Russell, Marilyn Monroe or the egregious Jayne Mansfield. Brassieres entered the consciousness already colonised by Freud, and anxiety about bosom shape afflicted all women, even young girls who were urged to get into a ‘training bra’ as soon as they could. There was a boom in the bust..." 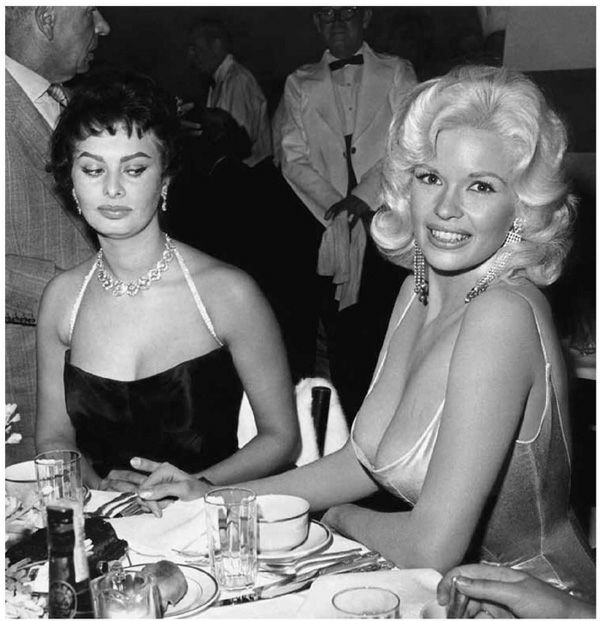 courtesy: Copyright holders of the picture

I must have seen Ms. Mansfield's pictures first in Life that my father used to bring home. She then was alive. I must have learned about her death many years after the event. I don't remember when I first  saw the 60-year-old picture above. Of course, once I saw it, it was almost impossible to forget it.

After maintaining silence for decades, Ms. Loren talked about this picture to Entertainment Weekly in 2014:

"...'Look at that picture. Where are my eyes?' Sophia told the publication. 'I'm staring at her nipples because I am afraid they are about to come onto my plate.' Indeed, the beauty - whose new memoir Yesterday, Today, Tomorrow: My Life will be released on Tuesday - looks put out that Jayne would let her chest be on such blatant display..."

Jocelyn Faris:
“...At 2:25 A.M. on June 29, 1967, Jayne Mansfield, Sam Brody, and Ronnie Harrison (a driver employed by Gus Stevens) were instantly killed in a freak automobile accident thirty miles from downtown New Orleans. Their car rear-ended a semi-truck in a white cloud of fog being produced by City of New Orleans mosquito spraying equipment. The three adults in the front seat received skull fractures and died instantly...

...Celebrity seekers sought to be with Jayne, even in death: "Her family had sought to avoid the sharp spotlight of publicity which the 34-year-old Miss Mansfield relished all her life. But the public craving to be near a celebrity, even in death, created a circus atmosphere in the tiny borough where she had spent several years of her early childhood . . . Spectators broke through police lines and ran across grass-covered graves to snap photographs of the bronze casket with its blanket of pink roses."...”

Posted by Aniruddha G. Kulkarni at 7:00 AM