"Shallow people demand variety – but I have been writing the same story throughout my life, every time trying to cut nearer the aching nerve". 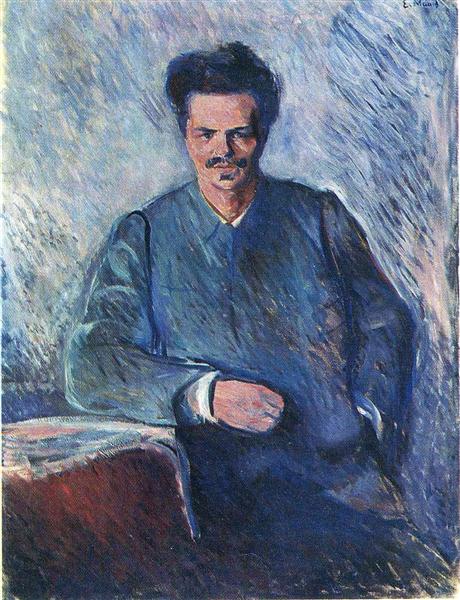 “…While living in Paris in 1895, the Swedish author and playwright August Strindberg asked his friend Edvard Munch to create a portrait of him. Presented with the resulting lithograph, Strindberg was not entirely satisfied: Munch had misspelled his name "Stindberg"—stind is Swedish for "stout" and carries a suggestion of pompousness—and had placed a naked woman along the border, which somewhat detracted from the seriousness of the image. At their next encounter, without saying a word, Strindberg placed a revolver on the table. Munch got the message: In the new version, he corrected the spelling and removed the lady.
From then on, their friendship deteriorated rapidly. Strindberg was given to absinthe-fueled paranoia, at one point believing that assassins were lurking next-door, playing three grand pianos simultaneously. He accused Munch of trying to kill him with a stream of gas through the wall and fired off a postcard: "Your attempt to kill me by the Pettenkofer method failed. Enjoyed the evening." Munch chose to leave town in a hurry.

Despite the tumult of their friendship, the two men were vital intellectual foils, as Sue Prideaux, the author of the superb "Edvard Munch: Behind the Scream" (2005), shows in her rich "Strindberg: A Life." They were part of a generation of writers and artists who in the last decades of the 19th century rebelled—not against science as such, Ms. Prideaux writes, but against the notion that there was a materialist explanation for everything. Instead, they strove for "a great renaissance of the soul against the intellect," she writes: "Munch was considered 'to paint souls' and Strindberg to write about them. Together they slaked the great thirst for the acknowledgment of the metaphysical."…”
Posted by Aniruddha G. Kulkarni at 9:00 AM