Garry Sobers 80 Not Out, Probably Scored in 20 Balls, Wearing No Helmet!


“Sir Garfield Sobers is easily the best cricketer I've ever seen, and if you're not convinced, then accept the opinion of the next best allrounder, Keith Miller, who once declared: "Best batsman of all time - Bradman. Best cricketer of all time - Garry Sobers."


Sobers is also the best batsman I've ever seen. Just like he could do everything on the field - bowl three different styles, take brilliant catches and throw down the stumps regularly - he was also a great all-round batsman. I rate him just ahead of another fine left-hander, South Africa's Graeme Pollock, on the basis that Sobers hooked and Pollock didn't...”

"Has there been a more versatile or natural cricketer? His status as the greatest ever Test all-rounder is rarely if ever questioned. Jacques Kallis’s figures bear comparison but Sobers was more of a front-line bowler and more capable of winning a match. For most of his career he would have been worth picking as batsman or bowler. There was nothing negative about his play. He didn’t use pad-play and he ‘walked’ if he knew he was out. Bradman said he saw no one hit the ball harder. He was largely untroubled by the best and fastest bowlers of his day – Ray Lindwall, Keith Miller, Fred Trueman, you name them – and even in an era before helmets he wasn’t in the habit of being hit on the hands or the body."

Mihir Bose, The Magic of Indian Cricket: Cricket and society in India:
"Just to see Garry Sobers field at leg slip was worth the admission money."

I have not seen him play but I have heard him play live!

When people for last several years talked about the greatest cricketer, I thought of only one name - Garry Sobers. No one comes even close to him. As a kid, to me, he was the ultimate sports hero and nothing has changed since to modify it. He may have been joined by a few more women and men, from different sports, at the top, but he remains there unmoved.

All my favorite sports writers/commentators  from Ian Chappell to Sunil Gavaskar to the late Rajan Bala have only reinforced my judgement.

This is what India's three great spinners had to say:

"..."Although England's Tom Graveney was perhaps technically the most perfect batsman, Sir Garfield Sobers was simply the best," Prasanna said.

As for Chandrasekhar, he "always found England's Ken Barrington very difficult to dismiss but Sobers will always remain the greatest."

Bedi summed it up well. "See players like Sobers and Bradman are in a different league. They are just class apart.

We won't see another Sobers or Bradman in the game," he said..." 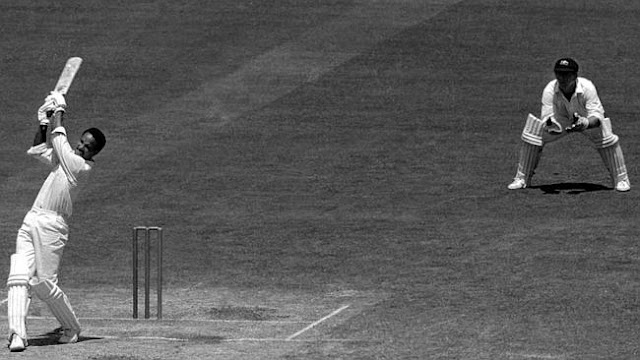 playing arguably the greatest innings ever in the history of cricket:  for the Rest of the World against Australia at the MCG in 1972
Posted by Aniruddha G. Kulkarni at 9:00 AM