“...Do you remember the rats; and the stench


Of corpses rotting in front of the front-line trench--


And dawn coming, dirty-white, and chill with a hopeless rain?


Arun Kolatkar (अरुण कोलटकर), 'Sarpa Satra', 2003/2004, page 56:
"...A nice yajnya, this.
Not a single sacrificial post in sight.
No ropes, no knives.
There's no need for the queen,
or anybody else,
to lead the animal to the killing field
and take its life by smothering it,
bludgeoning it,
or worse.
No need to carve up the parts
-omentum, liver, lung, bladder,
genitals-
and cook them separately;
or to roast
the victim's still-bleeding heart on a spit.
Oh no. Nothing of the sort.
Nothing crude.
It's all sorcery: mantras do it all..."


“...The largest volunteer army was the British Indian Army, which provided 1.2million men to fight. This is a staggering contribution; it’s thought that a tenth of the British war effort came from Indian soldiers. Despite the scale of sacrifice – 74,000 lost their lives in battle – knowledge of the contribution is sadly lacking.


My mission is to make sure their bravery, and that of others, is not forgotten. Immediately after the outbreak of war, divisions from India were dispatched to Europe. Thousands of men travelled across the world to fight for King and country – a King who wasn’t from their land and a country which they’d probably never seen.


It wasn’t just the propaganda that lured these men to battle. It was the glory that bravery would bestow on them, tribally and spiritually – and the 11-Rupee monthly salary...”

I did not know the Pooh as a kid but my son did and he used this plastic stool for a number of years at our home with great affection. We still call it simply 'Winnie-the-Pooh'. 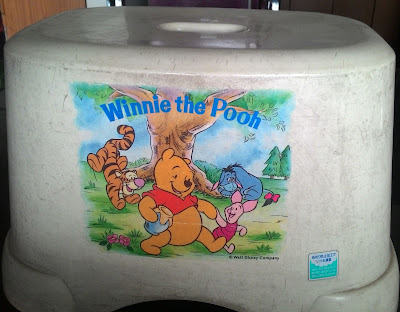 It's hard to believe that the same E.H. Shepard had not only participated in the war and won 'Military Cross' but also sketched the horror of the World War I trenches.

Jenny Uglow writes in ‘A Charmer in the Trenches’ for The New York Review of Books in October 2015:
“...Most of all in his prewar days, Shepard longed to join the elite group of cartoonists in Punch, of which Florence’s grandfather had been one of the founders. He had just managed this, with graphic social cartoons, when war broke out. In 1915 he joined up, soon to serve as an artillery officer with the 105th Siege Battery of the Royal Garrison Artillery. He was there with his troops on the Somme, at the battles of Arras and at Passchendaele, and later, in the last days of the war, in the fierce, snowbound fighting in the Italian Alps. Everywhere, he took his sketchbook...” 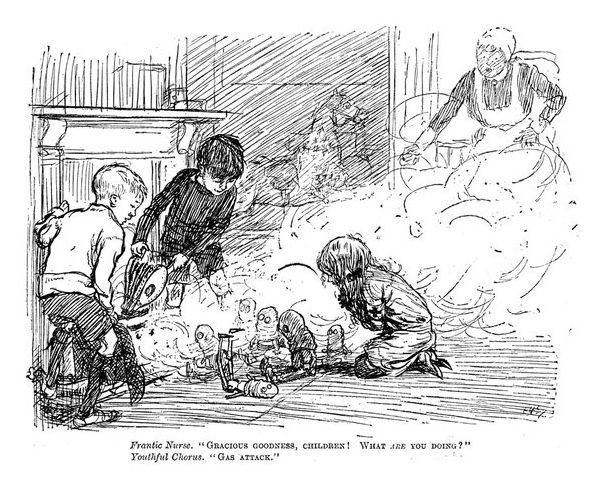 Geoff Dyer explains the "gas Attack' in his book ‘The Missing of the Somme’, 1994:
“...If shelling meant that courage would increasingly consist of endurance rather than gallantry, the introduction of gas condemned the soldier to a state of unendurable helplessness. Once an enemy gun emplacement had been knocked out, the danger from that source ceased immediately. Once a gas attack had been launched, all soldiers — even those who had initiated it — were simply at the mercy of the elements.
The first lethal gas, chlorine, was an inefficient weapon compared with phosgene and mustard gas which came later. Urinating in a handkerchief and breathing through it — as Robert Ross persuades his men to do in Timothy Findley’s novel The Wars — was often protection enough. Against mustard gas — which attacked the skin and eyes as well as the lungs — no protection was available. Since it could not be evaded, resisted or fled from, it eliminated the possibility not only of bravery but of cowardice, the dark backing which heroism, traditionally, had depended on to make itself visible.
Mustard gas was designed to torment rather than kill. Eighteen times more powerful than chlorine, phosgene was invisible and lethal— but effective masks soon became available. For their survival, then, soldiers were at the mercy of the same industrial technology that was evolving new means of destroying them.
The pattern for the century had been set: the warrior of tradition becomes little more than a guinea pig in the warring experiments of factories and laboratories..."


Oh no. Nothing of the sort.


It's all sorcery: gas does it all. 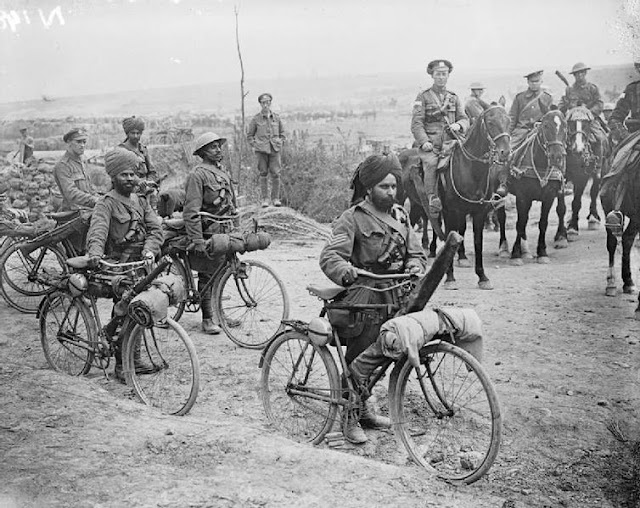 Indian bicycle troops at a crossroads on the Fricourt-Mametz Road, Somme, France

courtesy: Wikipedia
Posted by Aniruddha G. Kulkarni at 9:00 AM