BJP & Congress have played the Ace of Spades simultaneously: An Illustrator Suggested

George Orwell:
"Many children begin to know his characters by sight before they can even read, for on the whole Dickens was lucky in his illustrators."

"A brilliant illustrator can transform any story, revealing its possible meanings and sometimes changing them. Alice in Wonderland and Through the Looking-Glass would be less scary without John Tenniel’s drawings (especially those of the Duchess and the Jabberwocky), and Winnie-the-Pooh less lovable without the help of Ernest Shepard. Maurice Sendak brought his artistic talents to over seventy works by other writers, always making them more interesting."

Orwell, I feel, was never indifferent to illustrations in a book. He has sketched many small pictures himself.

But I haven't still seen Orwell's novels or reportage illustrated.

Now 'Animal Farm' can be a great book to illustrate and I know illustrated editions exist. But if I have to suggest one artist for the job, it would be the late Mr. Cullum. 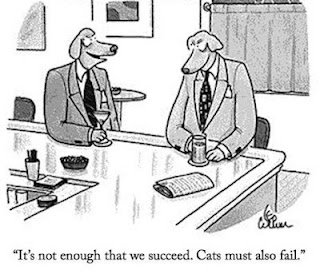 This is how the great book ends:

“The pigs and farmers return to their amiable card game, and the other animals creep away from the window. Soon the sounds of a quarrel draw them back to listen. Napoleon and Pilkington have played the ace of spades simultaneously, and each accuses the other of cheating. The animals, watching through the window, realize with a start that, as they look around the room of the farmhouse, they can no longer distinguish which of the cardplayers are pigs and which are human beings.”

Now, imagine how Mr. Cullum would have illustrated it...the way Napoleon and Pilkington, or BJP and Congress, are looking at each other, saying things and Mr. Cullum helping as interpreter for us like in the picture above...
Posted by Aniruddha G. Kulkarni at 9:00 AM