Sherpas Can Put Even Homer Simpson on the Everest

"Since the first ascent on May 29, 1953, by Edmund Hillary and Tenzing Norgay, some 3,836 people have climbed Mount Everest, with almost three quarters of them making the ascent in the last 10 years. The Himalayan peak has become "an amusement park," says top Italian alpinist Simone Moro, who has summited Everest four times."


I never liked the disclosure by Tenzing Norgay that it was Sir Edmund Hillary who put the first step on the Everest.

Why couldn't it be that both of them did it together?

MICHAEL J. YBARRA writes in his review of 'Buried in the Sky' By Peter Zuckerman and Amanda Padoan:

"The real climbing isn't done by the publicity-seeking adventurers with corporate sponsorships who lug satellite telephones up the mountain so they can blog about their exploits while relying on fixed lines to lead them upward."

[p.s. Mr. Ybarra was killed on June 30- July 1 2012 in a fall during a weekend mountain-climbing trip in the Sierra Nevada. The area where Mr. Ybarra is believed to have been climbing doesn't have trails and is used mostly by experienced mountain climbers.]

It is done by either Nepalese Sherpas or the Pakistani equivalent.

"It has become fashionable among the adventurers who attempt K2 to link their efforts to a worthwhile cause, however far-fetched, such as bringing attention to water conservation. The Nepalese and Pakistani climbers who help them also have a good cause: feeding their families. Given that the average worker in Pakistan earns the equivalent of less than $3 a day, the mountain work is enticing. A porter carrying loads to base camp makes $9 a day, and the high-altitude workers rake in much more: Climbers who make it to the summit customarily pay a $1,000 bonus. "When your family needs that money," Pasang Lama tells the authors, "sometimes you don't insist a weak climber turn back."

The money means little to the 8-year-old son of Jehan Baig, a Pakistani porter who died in the K2 tragedy when his son was 4. "I hate foreigners," the boy says. "Why do they come to climb mountains and kill our fathers?" K2 used to be known as the mountaineer's mountain. Sadly, that doesn't seem to be true anymore..."

There was a lot of noise on Marathi TV channels when a few Pune based climbers came back after climbing the Everest. I wonder if any of them- surely part of the 350 people mentioned below- spoke about the Sherpas.

"On Everest—where about 350 people reached the summit over two days this spring—Sherpas do virtually all the work, fixing lines to the top and sometimes even attaching the clients' ascenders (a metal device that clamps onto the line) so that they don't have to remove their mitts."

TV can be so shallow.

Sherpas always bring to my mind "King of the Hill", 23rd episode of the ninth season of "The Simpsons" first aired on 3-May-1998.

Homer agrees to climb the tallest mountain in Springfield, "The Murderhorn". He is aided by two Sherpas as guides. They drag Homer up the mountain as he sleeps. During one of these nights, Homer wakes up to discover that he is being secretly dragged, and fires the two Sherpas. 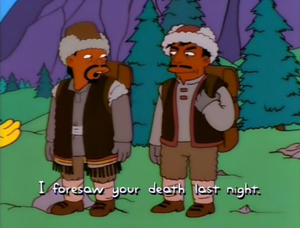 Bart: Oh, Dad's gonna die and it's all my fault!
Marge: Don't worry, kids, your father will be just fine as long as he's with those Sherpas.

Marge doesn't know so far that he's NOT with those Sherpas.

Lucky those who are!

And when they are, the climb is as smooth as an escalator like in the picture below: 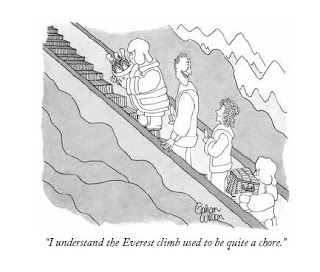