“… People like to see a family on the throne because it brings down the pride of sovereignty to the level of petty life”.

Sue Townsend, author of The Queen and I:

"In 2003 I wrote: “The monarchy is finished. It was finished a while ago but they are still making the corpses dance.” Now the corpse won’t allow the lid to be screwed down. It has lived a lie for centuries, was not ordained by God, did not have blue blood, has failed to be a good example of family life, and has more in common with the guests on The Jeremy Kyle Show than most of the population. It would be a kindness to sit on the lid of the coffin until the struggle is finally over."

"Remarking on what remained of the reverence for monarchy in 1823, William Hazlitt likens it to “a natural infirmity, a disease, a false appetite in the popular feeling, which must be gratified.” The dream-buying public wants a “peg or loop to hang its idle fancies on, a puppet to dress up, a lay figure to paint from.” The individual who cannot be all that he wishes to be looks for a mirror in which to contemplate “his own pride, vanity, and passions, displayed in their most extravagant dimensions…to see this reflex image of his own self-love, the darling passion of his breast, realized, embodied out of himself in the first object he can lay his hands on for the purpose.” The idol is best made from poor or worthless raw material because it is then subject to the whim of its manufacturer. The bargain is a Faustian one. The media affix price tags to carcasses of temporary divinity, but in return for the gifts of fame and riches, they require the king of the month or the queen for a day to make themselves available to the ritual for the public feast. What was once a subject becomes an object, a burnt offering placed on the altar of publicity."

The Diamond Jubilee of Queen Elizabeth II is being marked on the 60th anniversary of her accession to the throne upon the death of her father, King George VI, on 6 February 1952.

I wonder how India would have celebrated the event had she still remained the British colony.

Only last year India observed 100th anniversary of the last Delhi Durbar that was held in December 1911 to commemorate the coronation in Britain a few months earlier of King George V and Queen Mary, and their proclamation as Emperor and Empress of India and the shifting of India's capital from Calcutta to Delhi.

During the durbar "...the Gaekwar of Baroda caused widespread outrage by failing to follow protocol during the Durbar itself. Rather than making proper obeisance and walking backwards seven paces before leaving the arena, he ‘made a cursory bow from the waist, stepped back, and then, wheeling around, turned his back on the royal couple and walked away from their presence nonchalantly twirling a gold-topped walking stick’." (Peter Parker, The Spectator)

Now that would have made a great TV! 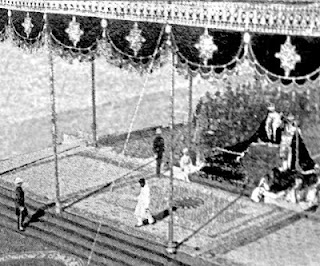 "The Gaikwar of Baroda paid homage peremptorily to the King Emperor. Afterwards he turned his back on him, causing a major political scandal."

courtesy: 'A Glimpse of Empire' by Jessica Douglas-Home


Sunil Raman and Rohit Agarwal write of the event:

“Today, a hundred years later, memories have been erased under the weight of dust, the sound of honking cars and motorcycles, the rush of people and indifferent residents...” 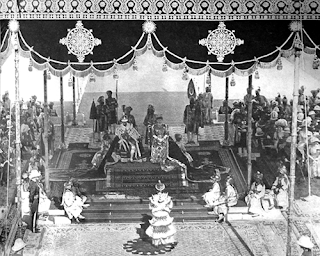 The King-Emperor receiving homage from the Ruling Prince of Burma

courtesy: 'A Glimpse of Empire' by Jessica Douglas-Home

"For the 1911 Delhi Darbar, a temporary tented city sprang up, spread over 45 square miles. The darbar went on for a week. Around 150 ruling chiefs, maharajas, zamindars and feudal lords were on display in full regalia, even as 100,000 spectators revelled in the royal splendour. There were special arrangements and enclosures for women in purdah. Begum of Bhopal, the most photographed ruler at the darbar, attended the ceremony in purdah.

With over £900,000 spent on it, the 1911 darbar was arguably the most expensive and ambitious assemblage. This was also an occasion for the British to show their military might. And this explained the extensive military bandobast with a total of 50,000 troops and the contingent of 50 bands of different units that were stationed in Delhi. Some of the prominent Indians present at the darbar included Motilal Nehru, Mohammed Ali Jinnah, Gopal Krishna Gokhale, R.N. Mudholker and Sachidanand Sinha."

Reminds me of Delhi 2010 Commonwealth Games. According to Wikipedia: The initial total budget estimated by the Indian Olympic Association in 2003 for hosting the Games was INR 1,620 crore. 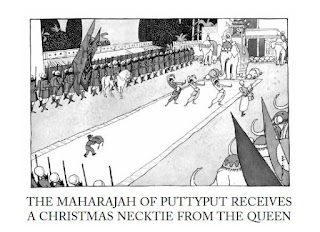