"I don't try to predict the future – I try to prevent it!"

"From the beginning, Bradbury was distinctly a prose-poet, lyricizing his own fears and yearnings, as obsessed with childhood as Wordsworth...His admirers rapidly grew to include such literary eminences as Christopher Isherwood and W.H. Auden...Like J.G. Ballard, another visionary who doesn’t quite fit comfortably in any genre, Bradbury actually writes about “inner space,” about loneliness and troubled hearts and our deep-seated fear of otherness."

But this year I have kept 'meeting' him on 'Alfred Hitchcock Presents' on Fox Crime. He and Mr. Hitchcock together take the crime genre to the heights seldom scaled by anyone. Their product is highly entertaining and deeply troubling.

For instance, 'And So Died Riabouchinska' starring aging Claude Rains and Charles Bronson is a mini masterpiece.

Bradbury has said: "My books are full of images and metaphors, but they're connected to intellectual concepts"...and his life was "a movement- a dance- among all these images.

This- recognition of importance of images- visuals- I like most about Mr. Bradbury.

Recently he wrote in The New Yorker dated June 4 2012:

"When I was seven or eight years old, I began to read the science-fiction magazines that were brought by guests into my grandparents’ boarding house, in Waukegan, Illinois. Those were the years when Hugo Gernsback was publishing Amazing Stories, with vivid, appallingly imaginative cover paintings that fed my hungry imagination. Soon after, the creative beast in me grew when Buck Rogers appeared, in 1928, and I think I went a trifle mad that autumn. It’s the only way to describe the intensity with which I devoured the stories. You rarely have such fevers later in life that fill your entire day with emotion.

When I look back now, I realize what a trial I must have been to my friends and relatives. It was one frenzy after one elation after one enthusiasm after one hysteria after another. I was always yelling and running somewhere, because I was afraid life was going to be over that very afternoon..."

What sticks out for me in the para above is : "vivid, appallingly imaginative cover paintings that fed my hungry imagination" 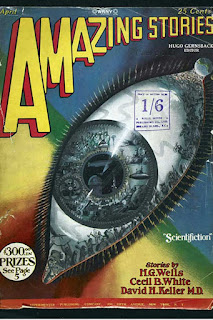 courtesy: Hugo Gernsback , Experimenter Publishing and British Library's 'Out of This World' exhibition

I also liked what Gerald Jonas has written about him:

"Mr. Bradbury referred to himself as an “idea writer,” by which he meant something quite different from erudite or scholarly. “I have fun with ideas; I play with them,” he said. “ I’m not a serious person, and I don’t like serious people. I don’t see myself as a philosopher. That’s awfully boring.” He added, “My goal is to entertain myself and others.”"

"Science fiction is also a great way to pretend you are writing about the future when in reality you are attacking the recent past and the present. You can criticize communists, racists, fascists or any other clear and present danger, and they can't imagine you are writing about them. Unfortunately, so much old science fiction is too technical and dry." 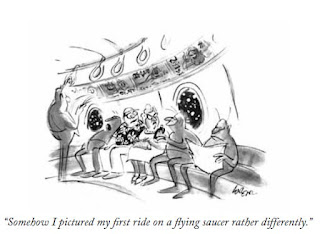 Mr. Lorenz's picture above is based on public transport in a developed country.

Well, I don't look forward to my first ride on a flying saucer!
Posted by Aniruddha G. Kulkarni at 9:00 AM