Nil-nil is STILL the score of life

Although I really love, Adam Gopnik's quote:
"The World Cup is a festival of fate -- man accepting his hard circumstances, the near-certainty of his failure. There is, after all, something familiar about a contest in which nobody wins and nobody pots a goal," he wrote in the New Yorker. "Nil-nil is the score of life. This may be where the difficulty lies for Americans, who still look for Eden out there on the ballfield.", I was happy to see the number of goals Germany were piling on.

I thought, maybe, just maybe, Nil-nil is NOT the score of life.

Look at Andres Iniesta in the picture below. He sure is feeling on top of the world. After yesterday, he doesn't ever have to touch a football again for fame and fortune. And yet he is hurting over the loss of his departed friend Daniel Jarque. 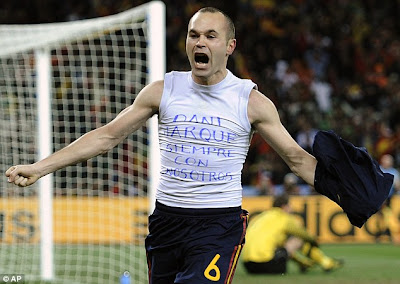 Richard Williams:"No more all-European finals, thank you very much. The one four years ago that ended with Zinedine Zidane's head-butt and a penalty shoot-out was bad enough. But no one seriously expected a classic in Berlin that day. Last night's match was supposed to be a fascinating contest of stylistic nuances, a collision of rival philosophies featuring some of the finest attacking talents in the modern game. But as we had to wait until deep in extra time for Andrés Iniesta's goal, 84,000 people in the stadium and a reputed 700 million television spectators were left wondering when the football was going to start..." (The Guardian, 12 July 2010)

(For the last night's match, Johan Cruyff, legendary Dutch player, chose to support Spain.
Imagine if Sunil Gavaskar were to support Pakistan against India in next year's cricket worldcup. There will be calls to lynch him!)
Posted by Aniruddha G. Kulkarni at 10:18 AM