Where do Marriages go?

When I heard that Gores were splitting- Al and Tipper Gore separating after 40 years of marriage- my only thought was: Would they have done it if Mr. Gore had become the president of USA?

Val: Where do you want it to go? Where do marriages go? After a while they just lay there. That's the thing about marriages."

DEIRDRE BAIR says in NYT June 4 2010:"For many married 20 to 60-plus years, the decision to divorce does not mean failure and shame, but opportunity."

Indeed opportunity for a few as depicted in the picture below! 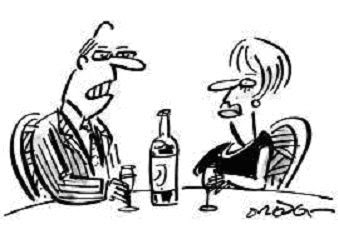 'There’s no easy way of saying this — remember how stunning you looked when we first met, darling? I’m leaving you for a similar woman.’

It would be great if this blog was linked to Facebook though FB does have privacy issues.

Wonder any Puneri Gore would come to such a conclusion after 40 ears of marriage .. and pray where is a marriage supposed to 'go' ..isnt a partnership through 40 years of ups and downs not a sufficient distance/ time to realize that it is going well .. these amrikans :)